November 02, 2020
comment
Despite the Santa Maria Recreation and Parks Department being forced to close its Drive-Thru Boo! Trick-or-Treating event early due to an unexpected number of cars, Santa Barbara County officials said that Halloween weekend was overall a success.

“For [the public health department], the biggest area of worry for Halloween was Isla Vista,” Suzanne Grimmesey said on behalf of the county’s Joint Information Center. “They really adhered very well to the alternative Halloween plans and adhered to the guidance. … They did great.” 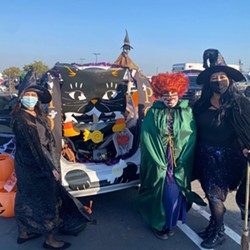 Grimmesey, the Chief Quality Care and Strategy Officer at the Department of Behavioral Wellness, said there was heightened law enforcement presence in Isla Vista to prevent things from getting out of hand, but that the county also took a preventative, educational approach in the weeks leading up to Halloween.

“The county met collaboratively with UCSB, Santa Barbara City College, the Isla Vista Community District, and others that would be involved in that leadership and influence,” Grimmesey said. “The planning started quite some time ago.”

The county put out door hangers, engaged in targeted messaging around the high risk of gatherings, recommended alternative ways to celebrate Halloween at a lower risk, and continued to advocate for mask wearing and physical distancing.

“There were a high number of signs that were posted on Friday—they’ll be up for several months all around Isla Vista—that enforce that any violation of health officer orders can result in fines,” Grimmesey added. “So it was really a collective effort, which included additional law enforcement being out, but a lot of other things too.”

“Volunteers dressed in elaborate costumes handed out candy from about 30 booths set up by businesses and nonprofit organizations,” van de Kamp wrote in an email. “This was a creative, socially distanced event scheduled for 6 to 8 p.m.”

But after traffic started to become congested—which van de Kamp said was exacerbated by visitors coming from local towns—“Out of an abundance of caution and recommendations from local law enforcement, it was decided by Recreation and Parks Department staff to close the event early,” van de Kamp wrote.

Van de Kamp added that the Santa Maria Police Department’s Oct. 30 “Trunk or Treat” event went off without a hitch.

The Santa Maria Police Department reported that there were no significant activities on Halloween night, van de Kamp said.

As for how Halloween weekend might impact the county’s COVID-19 numbers, Grimmesey said “there needs to be a period of waiting to see if there’s any uptick in cases. Public health will be looking at the numbers.”

From Grimmesey’s behavioral wellness perspective, she worries about the impact that a distanced holiday season might have on mental health.

“I think it’s going to be really hard as we go into the next upcoming holiday season because these are naturally holidays where families get together,” she said. “They hold a lot of memories for a lot of people.”

However, she added that continued vigilance is the best thing residents can do for the long-run mental and physical wellness of the community.