November 04, 2020
comment
San Luis Obispo County is working to reduce the number of residents with mental illnesses in its jail and provide better treatment to those who are behind bars. On Nov. 3, officials outlined a strategic plan to do just that.

The county’s three-year plan, part of its participation in the national Stepping Up initiative to improve mental health care at county jails, sets four priority areas for action. 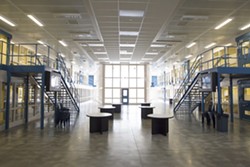 They include reducing the number of individuals with mental illnesses who are booked into county jail, reducing average daily jail populations, decreasing the average length of a jail stay, and lowering recidivism rates. Another goal is to expand how many inmates are connected to mental health treatment in the community upon their release.

Department leaders presented the plan and their progress to date to the Board of Supervisors on Nov. 3. The issue of local jail health care came to the forefront in 2017 with the death of Andrew Holland, an inmate with schizophrenia who died of a blood clot after being strapped to a restraint chair for 46 hours.

In their presentations, officials highlighted the programmatic and infrastructural changes implemented at the jail since 2017. SLO County now outsources its jail health care services to a private firm, Wellpath, whose work is overseen by SLO County Chief Jail Medical Officer Christy Mulkerin.

Mulkerin told county supervisors that the jail’s new programs, protocols, and facilities are proving effective at addressing mental health challenges at the jail. She highlighted its Jail Based Competency Treatment program, a new program that allows the county to treat inmates who are deemed incompetent to stand trial and restore them to competency.

The program reduces inmates’ need to wait for a transfer to a state hospital to receive treatment to restore their competency. According to a staff report, it’s saved approximately 90 jail days per participant and has served 34 inmates.

“It’s been a huge success,” Mulkerin said. “We’ve seen a decrease in the number of assaults in our jail, decrease in placement in our safety cells. … People are restored to competency very quickly.”

While the county’s made progress in expanding its services and facilities, it’s still seeing a high percentage of inmates with mental illness, including many who have co-occurring disorders like drug addiction.

As of September 2020, 22 percent of all jail inmates had serious mental illnesses, up from 11 percent last year. Officials say the increase is in part due to COVID-19 restrictions at state prisons and hospitals.

Sheriff Ian Parkinson said that his goal is ultimately to divert residents with mental illnesses away from the jail and toward the health services that they need.

“We certainly don’t want them coming to jail if possible. We do lack facilities, we do lack treatment,” Parkinson said. “Moving forward I think this is going to continue to be our biggest challenge.” ∆