November 09, 2020
comment
When Dylan Michael Canterbury Baker walked onto the Cuesta College campus about a year and a half ago, he didn’t necessarily see a commitment to creating a safe and inclusive space for all students and staff.

As a member of the LGBTQ-plus community, Baker said that while many offices and classrooms had a sticker in their windows that confirmed campus was a safe space and ally, he wanted to see more. 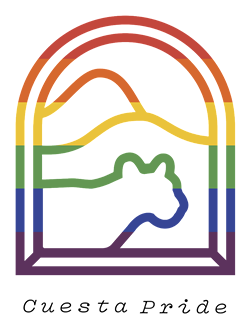 There hadn’t been an LGBTQ-plus-focused club on campus for a few years, so he set out to carve a space for himself and others.

Originally from Washington D.C., Baker said he learned early on that if he wanted to create a safe community for himself and others, he had to do it himself.

“Making a safe space for people is very important to me, because I’ve seen a lot of homophobic and antisemitic behavior,” he said.

Baker and about 13 others got the OK from the Cuesta College Student Life and Leadership Department and student senate to establish Cuesta Pride.

Aside from creating a community on campus that works with off-campus organizations such as the Gala Pride and Diversity Center and the Cal Poly Pride Center/Queer Student Union, Cuesta Pride has plans to have representation on campus.

Baker said the group’s goal is to advocate for the school to fly a rainbow flag on campus and to have a designated wall to paint rainbow colors on. In the long-term, he said the group will have virtual meetings with educational speakers and informational talks to educate students on local resources.

He and the other members of Cuesta Pride intend to lay the foundation for a long-lasting club that truly embraces LGBTQ-plus students and faculty on campus.

The group meets virtually every Wednesday at 6:30 p.m. and is creating merchandise to support their virtual events and goals. For more information about the club, email dylan_canterbury@my.cuesta.edu. ∆