November 11, 2020
comment
Arroyo Grande could be in line to get more much-needed affordable housing.

At a meeting on Nov. 10, Arroyo Grande City Council discussed the potential for a mixed-use development on a 2.16-acre site near the intersection of Oak Park Boulevard and Chilton Street proposed by the Housing Authority of San Luis Obispo (HASLO). 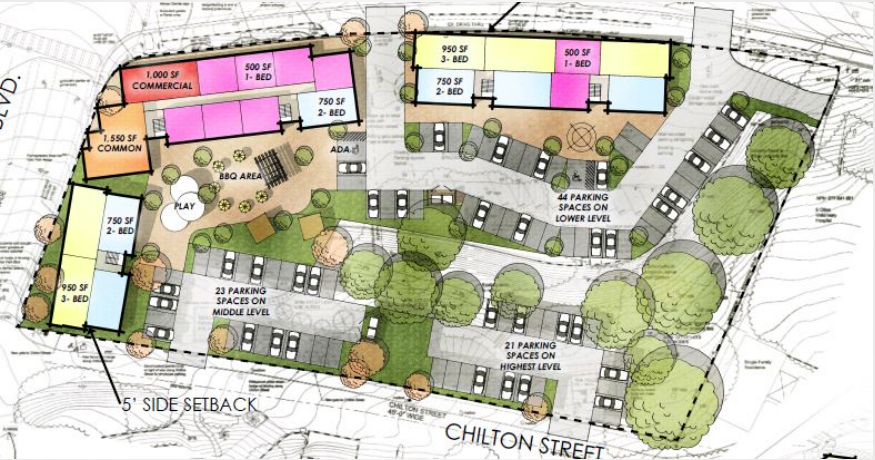 The Nov. 10 presentation was an effort on HASLO’s part to get early feedback from City Council and community members on a draft application for the project. A formal application hasn’t been submitted. As currently drafted, the development would include 66 one-, two-, and three-bedroom units geared toward those with an annual income at or below 80 percent of SLO County’s median income; 1,000 square feet of commercial space; an outdoor children’s play area; a common community space; and a barbecue area for residents.

“We are very excited to have the opportunity to try to further improve Arroyo Grande’s housing situation,” HASLO Executive Director Scott Smith said at the meeting, “especially for those people who are struggling, having great difficulty even paying basic rent in spite of working one full-time job, sometimes two full-time jobs.”

Smith said a project like the one proposed could go a long way in helping Arroyo Grande meet the goals and requirements outlined in its Regional Housing Needs Allocation, the state mandate that determines how many houses a city needs to build in a certain time frame. In Arroyo Grande’s upcoming housing element, Smith said it could be required to allow for the building of about 400 low- and moderate-income housing units.

HASLO recently wrapped up work on another affordable housing project in Arroyo Grande at 224 Halcyon Road. While Smith said that helps, it’s not enough.

“I can just tell you the need continues to be extreme,” he said at the meeting. “We had several hundred applicants for 224 Halcyon. It’s only 20 apartments and one of those is a manager’s unit. So it helps, but it’s just a tiny drop in the bucket.”

At the meeting, City Council members offered suggested changes to the project proposal but were generally supportive of the plan.

“I hope that you choose to submit a formal application and take the project through the staff advisory committee, Architectural Review Committee, and Planning Commission for approval,” Councilmember Jimmy Paulding said. ∆