November 12, 2020
4 comments
Dozens of Cuesta College students, faculty, staff, and San Luis Obispo community members called for board President Pete Sysak’s resignation at a special meeting on Nov. 12—the second time this month that community members have spent hours at public meetings doing so. But Sysak made it clear that he won’t be stepping down.

Sysak is the latest SLO County public official to be criticized for sharing controversial posts on his personal Facebook page—where he identifies himself as a Cuesta College trustee—that contain everything from totally false information, to anti-LGBTQ -plus and anti-Islam sentiments, and messaging comparing Black Lives Matter protesters to thugs. At the Nov. 12 meeting, Sysak addressed the issue publicly for the first time.

“I was accused of being a racist, homophobic, an ablest, anti-choice, xenophobic, anti-immigrant, and an old man,” Sysak said at the meeting. “I will state for the record that I am a supporter of all lives matter—for Black, Latino, Asian, LGBTQ, people of color, the unborn. I'm against discrimination, hate crimes, and racist groups. And I'm against defunding the police department, and blue lives do matter.”

Sysak called himself a “proud American conservative” who served in the United States Army, spent 27 years in law enforcement, and who has served his community in many different ways for several decades.

“It is important to acknowledge that communication from both sides of the story is part of solving problems in society,” he continued. “My social media sharing of differing views on this was meant to provoke communication from both sides of the issue. Sadly, these posts have inflamed certain progressive left groups, resulting in their incendiary and untrue comments that have spread throughout the community.”

Sysak pointed to a Facebook post he shared recently that many interpreted as a defense of the Proud Boys, a far-right organization that the Southern Poverty Law Center lists as an extremist hate group. The meme Sysak shared depicted a group of men—both white men and men of color—alleged to be members of the Proud Boys, and asked how such a diverse group could be considered white supremacists.

“At this point I was immediately identified as a racist supporter,” Sysak said at the meeting. “Another view I shared on Facebook was a video of Tianna Arata, a Black Lives Matter organizer and supporter from Cuesta College, a former student. During a BLM protest march in 2020, she was filmed throwing our American flag on the ground and dancing on it in a reverent and a demeaning manner. As an American, she has a right to protest peacefully. Well, I believe her actions were hateful and disrespectful to our country and community. Though I cannot speak for other veterans, I was deeply offended by her anti-American actions.”

Sysak went on to say that in his time at Cuesta, he’s worked to bring new programs and services to campus for all students, including those who are historically underserved and underrepresented. 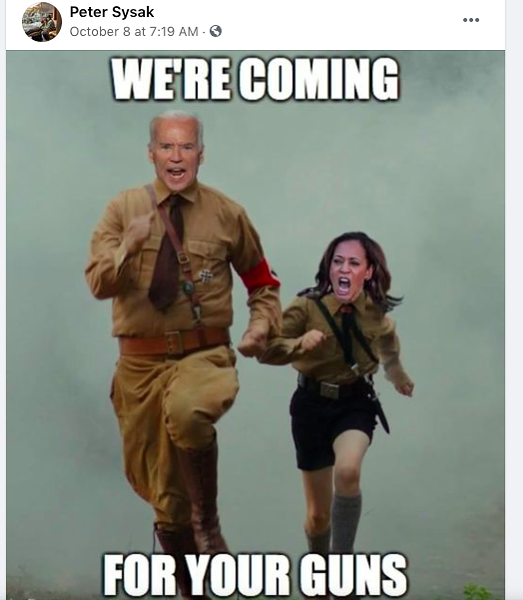 “These verbal and written attacks have been an assault on my character and integrity,” he said. “I will not be bullied by these attacks. I will continue to support my community and the college community to the best of my ability.”

The statement was met with shock and anger from community members in attendance, many who said they were students or faculty of color or members of the LGBTQ-plus community. They said they couldn’t feel safe on a campus led by someone with Sysak’s mindset. Cuesta’s other trustees condemned Sysak’s actions as misrepresentative of and insensitive to the campus community. They unanimously called for his resignation.

“Trustee Sysak, this is about our college,” trustee Mary Strobridge said at the Nov. 12 meeting. “This is about our students and faculty and staff, and we can't go on with this hatred or, you know, what your posts said. It made a statement, and it didn't make a statement that was good for our college. And because you did put that you were a trustee of the college, it falls on the college, it falls on the trustees, it falls on everyone here. And so, for me personally, I ask you to please resign.”

Sysak refused to resign several times throughout the meeting.

Outgoing trustee Angela Mitchell, whose term ends this year, pleaded with Sysak to get educated about racial equity.

Mitchell was also criticized in September after the Cuesta board of trustees postponed the approval of a resolution to affirm the board’s commitment to equity and anti-racism. During a meeting regarding the resolution on Sept. 2, Mitchell took issue with the inclusion of wording like “systematic racism,” which she said implied that everyone in society is racist. Sysak agreed, and added that he’d like to scrap phrases like “centuries of institutional racism” that were included in the original draft of the resolution.

That conversation, which many students found troubling, is what brought the community’s attention to Sysak’s Facebook presence.

Mitchell has since apologized for what she said in September, and said she misunderstood the terminology included in the resolution and the bigger issues of equity it attempts to address. Mitchell said she’s been working to learn about systemic racism and white privilege ever since, and at the Nov. 12 meeting, she suggested Sysak do the same.

“And I’m saying this out of the kindness of my heart,” Mitchell said to Sysak at the meeting, “but you do have misogynistic tendencies and you dismiss women on a regular basis and I’ve watched it since you’ve been on the board. And I blame myself for not saying anything about it sooner. But I didn’t really know what to say or how to address it. But now I am and I really want you to look at that.” 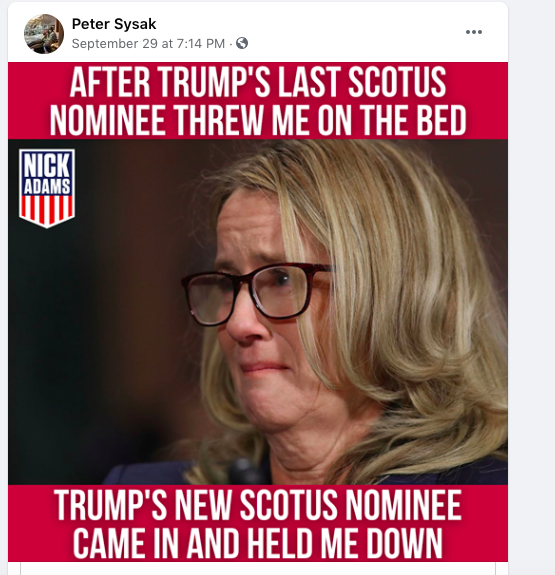 When Sysak questioned what Mitchell was suggesting, she went on to say that she decided not to run for reelection this November because of Sysak’s dismissive behavior toward women.

“You know most of that, I’m sorry, I can’t understand and it’s very garbled,” Sysak responded to Mitchell. “And I’m gonna have to have somebody interpret for me because you’re so emotional I don’t know what you’re saying.”

In lieu of Sysak’s resignation, the board voted unanimously to create an ad hoc committee—consisting of trustees Strobridge and Patrick Mullen—to review Sysak’s social media posts and recommend further action from there. ∆