It will be surveying groundwater resources in the eastern management area of the Santa Ynez River Valley Groundwater Basin. 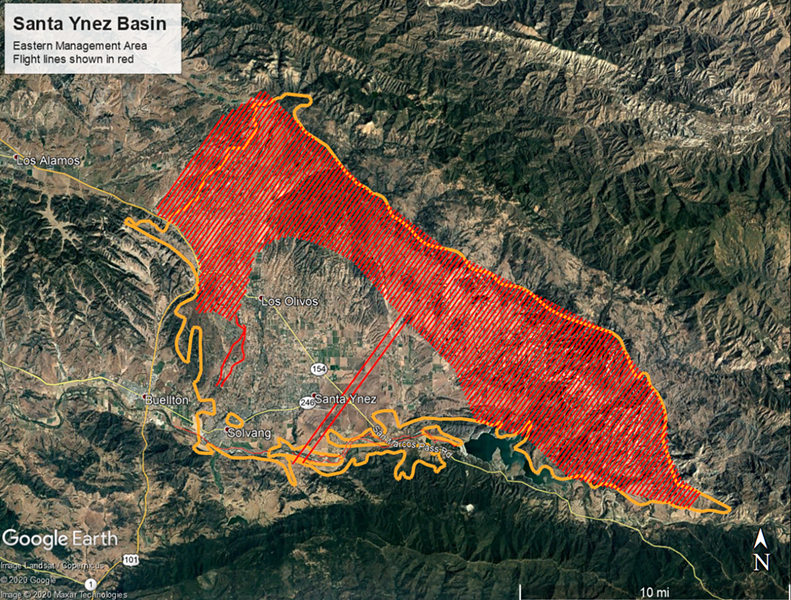 “To meet those requirements you have to be able to describe the basin and describe how water flows through it, describe the water budget—how much is coming in and how much is going out—if it’s in balance, and then identify ways to keep it managed sustainably,” he said.

Agencies need to distinguish the geometry and shape of the basin as well as the aquifers within it that carry the water.

Young said, traditionally, agencies drill groundwater wells to gather data like that. However, that method is expensive and a long-term project. Data collected with aerial electromagnetic mapping technology can characterize and map out the layers and extent of clays, silts, sands, and gravels to a depth of approximately 1,000 to 1,400 feet below the surface. Existing well data will be used to verify the survey results. Surveys only take days to about two weeks, depending on the area.

A low-flying helicopter tows a large hoop transmitting a weak electromagnetic field. The field interacts with the ground and measures the response using a set of receiver coils attached to the hoop.

The helicopter will fly back and forth along regularly spaced lines to cover a distance of approximately 497 miles. Once combined and calibrated with well data and existing knowledge of surface conditions, the dataset can be used to map out the “course” materials (sand and gravel), “fine” materials (silts and clay), and bedrock to show the structure of the groundwater system.

Although the technology has been around for a while and was mostly used in the mining industry, Young said it’s relatively new to groundwater. Recently, it was utilized in Paso Robles (Paso Robles Groundwater Basin) and Pismo Beach.

The two agencies involved in the study are currently preparing their groundwater sustainability plans and will release documents in the next couple of weeks describing the hydrogeological conceptual model—the current understanding of basin geology and condition.

Young said the aerial study results will inform and modify those plans, and likely be part of the draft groundwater sustainability plans coming out next summer.

He encourages interested residents to attend and get involved with Santa Ynez Valley Groundwater Basin meetings. ∆