November 18, 2020
comment
Fewer properties over the Paso Robles Groundwater Basin will be subject to severe water restrictions after the San Luis Obispo County Board of Supervisors voted on Nov. 17 to revise the basin’s “area of severe decline,” eliminating roughly 37,000 acres.

The map change means that those properties removed from the “red zone” are now eligible to pump up to 5 acre-feet of groundwater per year (AFY) as an exception to a basin-wide moratorium on new pumping. 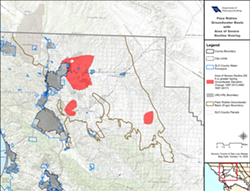 SLO County amended the map by using more recent groundwater data and a different definition of “severe decline.” For land to be included in it now, county well monitors must show a 50-foot or more drop in groundwater levels over a longer period of time between 1997 and 2017.

San Miguel landowners Robin Chapman and Robert Galbraith are among those now free from the red zone restrictions. The generational farmers had been barred from using any water despite providing well data that showed steady groundwater levels in their area.

First District Supervisor John Peschong said he was happy to see the family not included in the red zone anymore.

“That is good news there,” he said.

But the supervisors didn’t all agree on the policy change. Second District Supervisor Bruce Gibson, who was the sole dissenting vote, warned that the removal of land from the red zone would lead to more groundwater pumping from an already overpumped basin.

“We would expect pumping to go up,” Gibson said, “ ... even if a small percentage of sites take advantage of this. I think that’s a significant issue that gives me pause.”

Fifth District Supervisor Debbie Arnold countered that the region’s biggest irrigators, like grape growers, are already pumping the lion’s share of the groundwater. She felt that more exceptions would not change the overall picture.

“We’ve got tens of thousands of planted vines that are all being irrigated,” Arnold said. “Five AFY would probably allow you to have some horses on your property and/or some livestock, but it’s still a minimal amount of water usage.” ∆