More than 88 percent of SLO County’s 184,050 registered voters cast ballots this year—both set local records. Nearly 95 percent of voters voted by mail amid the pandemic, which is also a record. 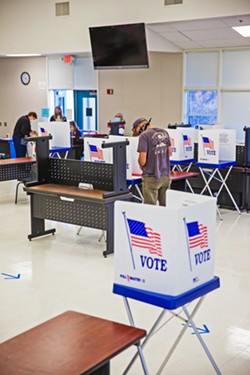 SLO County Clerk-Recorder Tommy Gong declared the election “one for the ages” in a Nov. 25 statement.

“With unprecedented circumstances due to the coronavirus pandemic, all voters in California were sent vote-by-mail ballots and fundamental changes were made to precinct operations to maintain a safe voting environment across the state,” Gong said. “With much political unrest throughout the nation, this election was among the most divisive and the most closely watched in the modern election era. Yet counties, large and small, performed admirably.”

Several local races and measures went down to wire, staying too close to call for weeks.

Both Biden and Trump earned bigger shares of the local vote than candidates Hillary Clinton and Trump did in 2016. In that election, Clinton won 48.9 percent to 40.94 percent, with roughly 10 percent going to third-party or write-in candidates. In 2020, that 10 percent shrunk to less than 3 percent. ∆