December 03, 2020
comment
The Santa Barbara County Animal Services Department is using the pandemic as an opportunity to overhaul what Animal Services Director Angela Walters Yates called “an industry stuck in brick and mortar.”

“When you find an animal or you can’t take care of an animal, you just bring it to the shelter, and the shelter warehouses those animals until they can find another outcome for them,” Walters Yates said. 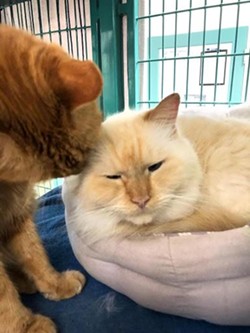 But with COVID-19 creating staffing challenges and changing and the way shelters can safely operate, Walters Yates said a new wave of “community-based sheltering” is being ushered in. She likened it to the nationwide conversations happening around community-based policing, which seeks a proactive approach to public safety, rather than reactive.

“We’re having conversations in the animal industry like, what is community-based sheltering? How do we deliver services to the community so that they can keep their animals?” Walters Yates said.

She explained that shelters, such as those operated by the county, have long measured success by how many animals they care for in a year. But that paradigm is shifting.

“It may become, how many animals did we prevent from coming in the shelter—not because we turned them away, but because we found a different outcome for them that was better,” Walters Yates said.

The county made a move in this direction on Nov. 19, when it announced that it would temporarily close its Lompoc shelter and concentrate staffing and animal care at its Santa Maria and Santa Barbara shelters, effective until Jan. 31. But Walters Yates emphasized that this is not the reduction in services that it appears to be: It’s essentially a pilot program for community-based sheltering.

“We decided to increase our partnership with CARE4Paws and CAPA [Companion Animal Placement Assistance]. We started increasing the number of vaccination clinics and licensing clinics. CARE4Paws increased their number of pet food distribution days [in Lompoc]. CAPA came forward and extended their offer to microchip, for free, every animal in Lompoc,” Walters Yates said.

Essentially, the county is looking for ways to address the root cause of animals ending up at shelters and to break that cycle.

“For example, if there’s a dog that keeps getting out of its yard and picked up by animal control, and then the owner has to come down to the shelter and pay a redemption fee every single time, could we send a crew of volunteers that go out and help mend that fence?” Walters Yates said. “It’s just turning it upside down and looking at the problem in a different way.”

As county Animal Services tries out this new way of doing things, it also continues to support events that encourage the adoption of already sheltered animals. Most recently, local shelters teamed up for a Black Friday, Saturday, Sunday, and Monday Event in which any animal with black fur, spots, or coloring would have its adoption fees waived on those days.

“Animals with black fur are generally harder to get adopted,” Animal Services Community Outreach Coordinator Michelle Maltun said. “But we want every animal to have a chance to go home for the holidays, so we extended that to mean any animal with black on them.”

The event led 25 animals to their forever homes, which Maltun said is a solid number for a holiday weekend, as shelters normally see a lower adoption rate over the holidays.

“We’ll be doing some special fostering and adoption promos over the December holidays,” Maltun added. “We’re going to be doing our Foster Express … to create some awareness and encourage people to bring an animal home. That will be Dec. 19 through Jan. 9.”

Finally, from Dec. 12 to 24, the county’s Twelve Days of Winter Whiskers event will promote a reduced adoption fee of $12 for community members looking to add a furry friend to their homes. Δ