January 04, 2021
comment
The U.S. Food and Drug Administration (FDA) blindsided distilleries across the nation last month when it charged the businesses more than $14,000 in fees for making hand sanitizer during 2020.

The U.S. Department of Health and Human Services swiftly came to distilleries’ aid, ordering the FDA to void the fee charges days later. 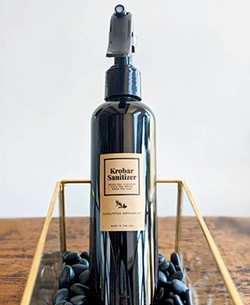 Stephen Kroener, co-owner of KroBar Craft Distillery, told New Times he received a notice from the FDA early in the morning on Dec. 29 and was shocked.

“To levy a fee on us out of the blue was inconsiderate. We are already struggling and to throw this on us kept me up at night for multiple days,” Kroener said.

On Dec. 29, the FDA issued two fees on craft distillers that created hand sanitizer during the pandemic as part of the Coronavirus Aid, Relief, and Economic Security (CARES) Act.

The agency’s statement pointed to the act’s legislative initiative that would reform and modernize the way certain nonprescription, over-the-counter (OTC) drugs—such as hand sanitizer—are regulated in the U.S. These drugs, known as OTC monograph drugs, may be marketed without an approved drug application if they meet requirements of the Federal Food, Drug, and Cosmetic Act.

The act established an OTC monograph drugs’ user fee program, and with it, the FDA could assess and collect fees from certain manufacturers. That facility fee would cost distilleries making hand sanitizer $14,060 with an additional $9,373 for contract manufacturing. All fees for 2020 would have been due by Feb. 11, 2021, and if distilleries didn’t immediately enroll in the program or cease production, they would be charged twice.

Kroener said the fees would have had a significant impact on his business.

“December was bad enough with the second shutdown; January is not looking much better. The $14,000 fee combined with all our other bills spells disaster,” he said.

KroBar and Calwise Spirits Co., both Paso Robles-based businesses, were among the first to switch gears from spirits to sanitizer during the initial local stay-at-home order in March 2020. At the time, everyone from residents to hospitals were having trouble finding hand sanitizer to purchase.

Similar to KroBar, Calwise Spirits Co. distiller and President Aaron Bergh said the shortage was concerning, especially when he learned that even frontline workers couldn’t get their hands on the product.

“The big companies could not keep up with their supply chains, so I decided to spring into action,” Bergh said. “Overnight I converted my distillery into a hand sanitizer manufacturing facility and produced 5,000 gallons in a six-week period that was distributed throughout SLO County and the state.”

On Dec. 31, after an emergency meeting, the U.S. Department of Health and Human Services released a statement from Chief of Staff Brian Harrison via Twitter, expressing his department's intent to protect small businesses from the FDA fees.

“Small businesses who stepped up to fight COVID-19 should be applauded by their government, not taxed for doing so,” Harrison said. “I’m pleased to announce we have directed [the] FDA to cease enforcement of this arbitrary, surprise user fees [sic]. Happy New Year, distilleries, and cheers to you for helping keep us safe!” ∆