January 05, 2021
comment
As cities everywhere grapple with the economic fallout of COVID-19, San Luis Obispo is slated to host a virtual community meeting on Jan. 14 to hear from residents about where they think the city should focus its budget for the next two years.

The 6 p.m. meeting is “intended to solicit suggestions from residents, community groups, stakeholders, and interested individuals on city goals” in the midst of “unprecedented and challenging times,” according to the city. 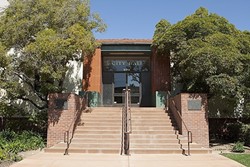 It’s intended to kick off a decades-old practice in the city of developing budgets in two-year cycles. Part of the focus in this cycle will be how to spend new sales tax revenue generated by Measure G and how to navigate SLO’s recovery from COVID-19.

“Although we can’t meet in person for this important engagement process, we are excited to bring our community this opportunity to share their priorities virtually,” SLO Finance Director Brigitte Elke said in a Jan. 5 press release.

In addition to announcing the meeting, the city also released the results of a community survey on the budget, which received nearly 1,300 responses. Topping the list of priorities among respondents was homelessness—followed by economic stability, recovery, and resiliency; housing; open space; and downtown vitality.

In survey questions about “other” priorities, Laguna Lake dredging (and park maintenance) proved by far the most popular, followed by “limit growth and development.”

Despite the disruption wreaked by COVID-19, SLO officials report that the city has “maintained a stable financial position into this current fiscal year with its reserve levels and unassigned General Fund balance intact,” according to a Jan. 12 City Council meeting report. ∆