May 04, 2021
comment
Appointments will no longer be required at a couple of San Luis Obispo County’s COVID-19 vaccine clinics, as demand for the vaccine tapers.

On May 4, SLO County Public Health Officer Penny Borenstein announced the walk-in option for the county’s clinics at the Paso Robles fairgrounds and the South County Regional Center in Arroyo Grande.

“We have enough availability in the coming days and weeks [to accommodate it],” Borestein told the SLO County Board of Supervisors during a COVID-19 update. “We’re seeing demand at our mass clinics come down.” 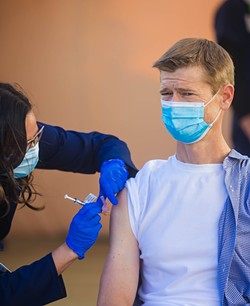 While residents may show up and receive a vaccine at any point during open clinic hours, she still encouraged locals to make appointments beforehand at myturn.ca.gov.

Borenstein added that the county is starting to look ahead to eventually scaling down its three vaccine clinics, as it expects the vaccine demand to continue to drop, mirroring a trend across the country.

“We’re really seeing a change in the demand,” she said. “Thus, our strategies are changing as well.”

SLO County’s clinics are still currently booked full with second shot appointments, but officials said the demand for first shot appointments has started to fall off. When the county does downsize its clinics, that process will likely happen gradually, according to Public Health Department spokesperson Michelle Shoresman.

“We won’t likely just all of a sudden shut down a site. We want to make sure that vaccine is available at all locations. But what we might do is scale back the number of [vaccination] days at each site,” Shoresman told New Times.

The next phase of the county vaccine campaign will be more targeted—trying to reach communities and populations that have lower vaccine rates with “surgical precision,” Borenstein said.

“[We’ll be] working hard to get to smaller venues where we need to bring the vaccine to populations,” Borenstein said.

As of April 30, SLO County Public Health had administered nearly 150,000 vaccine shots at its three clinics, with 64,444 people fully vaccinated. Roughly 23,000 more have been vaccinated through pharmacies and other providers.

According to a New York Times vaccine tracker, about 31 percent of the SLO County population is fully vaccinated—including 37 percent of adults and 62 percent of people 65 and older. ∆
—Peter Johnson