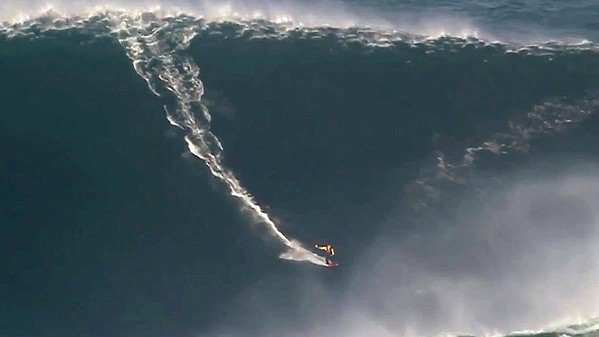 Big wave surfing pioneer Garrett McNamara leads us on a journey through this six-part documentary series that details his decades-long quest to find and ride the world's largest surfable wave, hoping to find a monster that is 100 feet or higher. His wife and manager, Nicole, is always by his side, and the two soon discover an unknown and treacherous big wave surf spot in Nazaré, Portugal. What was a small fishing town is now the site of huge tow-surfing events and competitions each year.

Through near death and varied injuries, Garrett's quest is one most people would never fathom or would quickly give up on, but McNamara is clearly wired differently—as are many of the surfers featured in the series. If you've ever gotten caught in "the washing machine" while surfing, you know how frightening and disorienting it can be. Now amp that up to waves that can quite literally wipe you away never to be seen again, and you get the idea of what type of adrenaline-fueled athletes stay in the game of big wave surfing.

There are many interviews with his fellow friends and surfers as they chase the dream as well. We also learn some of what it looks like to be a professional athlete in this sport, how your ability to make money, buy equipment, and so on relies on sponsorship, and how fickle that world can be. Breathtakingly shot and with plenty of beautiful footage both from in the water and out, this series isn't just for the surfers out there. This is much more a story of a man, his focused vision, and the world he built and invented to make his dreams a reality. (six approximately 55-min. episodes) Δ