Co-writer and director Sam Mendes (American Beauty, Jarhead, Spectre) helms this World War I epic about two young British soldiers—Lance Cpl. Blake (Dean-Charles Chapman) and Lance Cpl. Schofield (George MacKay)—who are tasked with the impossibly dangerous mission of crossing German lines to warn the 2nd Battalion of the Devonshire Regiment that their planned impending attack against the Germans will be charging into a deadly ambush, and to make the perilous mission even more urgent, Blake's brother is among the 1,600 endangered soldiers in the regiment. (119 min.) 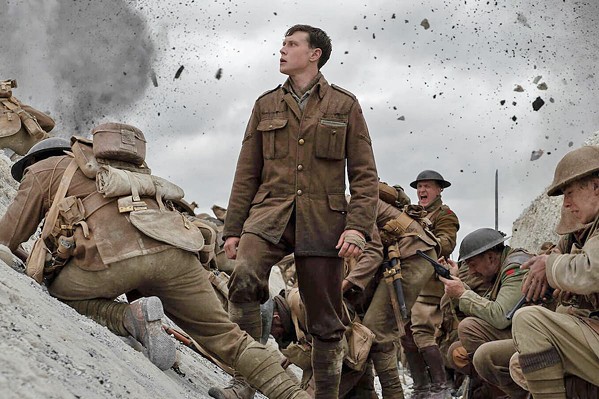 Glen Holy heck! If this film doesn't result in a Best Cinematography win for director of photography Roger Deakins (Blade Runner 2049, Skyfall, No Country for Old Men, Fargo), then the Academy is broken. This is a remarkable technical achievement. The photography makes it appear as if the film is shot in one long and continuous take, which lends the picture an immediacy and an immersive quality that makes this terrific but simple story even more engaging. There are, of course, some breaks in the filming—for instance when everything goes black after an explosion or when the two characters move from daylight into an inky black tunnel. I'm guessing, too, some CGI was employed in service to the one-long-take illusion, but there are a lot of long extended takes as the camera moves around the actors, goes in and out of various lighting situations, makes some rack focus changes to draw viewers' attention, and follows Lance Cpls. Blake and Schofield on their death-defying mission. The camera work is simply stunning. The two men must traverse about 8 miles through enemy territory, which had reportedly been evacuated, but along the way the men encounter boobytrapped German trenches and tunnels, an aerial dogfight, a sniper, and more. They're in a race to deliver their message and save 1,600 soldiers from slaughter, but they're not superhuman heroes—they're scared boys traveling through a battlefield littered with bodies, and they know only too well that they could easily join the rotting dead.

Anna It certainly is an achievement in cinematography; the execution of the continuous-take style filming is astounding. The storyline does not fall short of the film's epic visuals—the two young men who have been tasked with saving more than 1,600 soldiers from certain death are heartbreakingly real. Blake's brother is in the group of men fated to die if orders to call off the attack are not delivered, and his love for family and for his big brother are evident as soon as he learns of his task. He will not wait for nightfall; he will not stop no matter the danger. Schofield is a bit more mysterious—though bits and pieces of his life back home are given to us throughout the film. The two are smart and brave; they're young yet already will bear the battle scars of war. The scenery is both breathtaking in its beauty and heartbreaking with wartime gore. The Germans have retreated to a line further back, but have destroyed the landscape in their wake. Cherry trees have been cut to the ground while their ephemeral blossoms waft through the breeze like snow; cows were slaughtered by machine guns simply to prevent the other side from being left a food source. The countryside is its own kind of war casualty. Despite the blood and bloated corpses and mud and violence, this film is magnificently beautiful. I was captivated until the very end.

Glen The film boasts some great actors in small but essential roles. Colin Firth is Gen. Erinmore, the man who gives Blake and Schofield their impossible orders. Mark Strong is Capt. Smith, who they meet along the way as he's trying to lead his own squad through enemy territory on another mission. He warns them that when they deliver the order to stand down, to do it in front of witnesses because some commanders just want the fight. Benedict Cumberbatch stars as Col. MacKenzie, who indeed seems hell-bent on charging his men into battle. Each of these actors brings gravitas to their roles, but the story belongs to the two young men, and relatively unknown actors Chapman and MacKay deliver compelling performances. Apparently, the basis for the story came from director Mendes' grandfather, Alfred Mendes, a war hero who would enthrall his grandkids with stories that were eventually published in his posthumous memoir. I won't be a bit surprised if in addition to Best Cinematography, 1917 also wins Best Picture and Best Director (though Pedro Almadóvar is currently favored in the category) at the upcoming Feb. 8 Academy Awards. Mendes recently won the Best Director title from the Golden Globes, and 1917 also took home the Golden Globes' Best Motion Picture-Drama award. Of course, there's also Once Upon a Time ... in Hollywood, The Irishman, Parasite, Ford v. Ferrari, Joker, Little Women, Jojo Rabbit, Marriage Story, The Farewell—some stiff competition this year! Win or not, 1917 is a must-see film on the big screen. Don't miss it!

Anna Agreed, this one is meant for the big screen. It would be a huge mistake to miss this one in theaters—no matter how big your TV is, subtle detail will get lost in translation. It certainly will be a tough year at the Oscars, but 1917 has earned its place and then some in the nominations. I'm very impressed with the two leads—everyone else is periphery, and Chapman and McKay weave a complicated narrative among the travesties of war. I hope to see more of these two on the big screen soon. If nothing else, 1917 is a triumph in filmmaking. It is so cleverly and meticulously shot it deserves all of the accolades it receives. Even if war movies aren't your favorite genre, the heroic journey that happens within the 8 miles traveled is harrowing and heartbreaking. Schofield and Blake are in a forced brotherhood, a pact to see their mission through to the bitter end, slung together through whatever impedes their path. Every action comes down to the razor-thin chance they have of reaching MacKenzie in time and hoping he will heed the direct orders. It's a heart-pumping journey, with moments that feel guardedly private in their grief and sentiment, yet large and unbending in a show of the brute force of will and war. This is one I'd happily see again before it leaves the theater—it is just that good. Δ