40 Prado homeless center to open in next two weeks

One knee-jerk reaction that people may have when they see San Luis Obispo's brand new and long-awaited $5.2 million homeless center at 40 Prado Road—with its multiple wings, high ceilings, big windows, and spacious courtyard—is: "That is one nice homeless shelter." 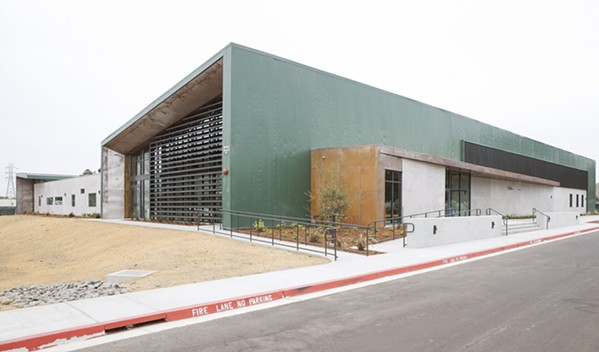 To which Grace McIntosh, deputy director of the Community Action Partnership of SLO (CAPSLO), would be quick to push back and say: "It's really not a shelter."

"We're really trying to get away from people thinking we're just a shelter. Because we're really not. We're so much more," McIntosh told New Times during a tour of the facility on Sept. 28. "It really is the '40 Prado Services Center.'"

The center is empty on this morning but for a handful of workers shuttling in furniture and other materials, completing the final necessary tasks before the launch. As CAPSLO gears up for the center's opening sometime "in the next two weeks," McIntosh emphasizes the breadth of services that 40 Prado will provide for the homeless community.

It's a facility that she says will do far more than just combine what's offered at the Prado Day Center and the Maxine Lewis Memorial Shelter in SLO today.

"One would think that, well, you're just breaking down two and going into one. It's not that big of deal, right?" McIntosh said. "But it so is because of schedules, procedures, how to do the day-to-day routine of it. It's so different."

While 40 Prado is a large building (more than 20,000 square-feet in size), every inch appears meticulously mapped out to serve a specific purpose and population. One wing is for the day center, with a large commercial kitchen and cafeteria, locker rooms equipped with showers, a work area with tables and plugs for computers, and a kids' room set up for after-school activities. Another wing has the overnight dormitories, where there are 100 total beds with separate rooms for single men, single women, and families.

These two wings are distinctly separate, and during daytime hours the hallway that connects the two will close. McIntosh said safety is paramount, and a successful operation at 40 Prado will require clear boundaries and careful coordination.

"We talk a lot about our motto, 'compassionate accountability,'" McIntosh said. "We talked about it as a staff yesterday, and I said, 'You know, that includes us. ... If we don't have it together, how can we possibly expect our participants to have it?'"

Just outside the facility is a grassy courtyard with space for a playground, community garden, and pet kennel. Across the parking lot, SLO County has plans to build a detoxification center.

McIntosh said sobriety at the 40 Prado center will be "strongly encouraged," but won't be a requirement for entry. Instead, policies are more behavior-based. She talked about an approach of "harm reduction" that CAPSLO staff has training in.

"The whole philosophy is about an ongoing dialogue," she said. "It's this ongoing discussion, which hopefully prevents the final, 'You need to go.'"

The center aspires to administer an array of services to the homeless in tandem—food, shelter, medicine, counseling, child care, laundry, recreation, and career resources. With significantly more physical space than ever, the facility can juggle all these services and their providers. McIntosh hopes the space will also allow for a vibrant volunteer program at 40 Prado.

For McIntosh and others deeply involved in 40 Prado, its launch will mark the culmination of many years of hard work, twists and turns, and fundraising.

"Homelessness is a polarizing issue," McIntosh said. "But I don't know a lot of people who haven't been in some way personally touched by someone who's either been homeless or dealt with drugs and alcohol or mental health issues. This is somebody's kid or spouse or brother. These people belong to somebody."

Mindbody has announced a partnership with TalentPath by Treehouse and the Boys and Girls Clubs of Santa Maria Valley to bring underrepresented groups to the tech industry. Mindbody will sponsor 10 individuals selected by the Boys and Girls Club to participate in a software development training program that could lead to an apprenticeship at the SLO-based tech firm. Δ