The permitting process to operate a brick-and-mortar cannabis dispensary in the city of San Luis Obispo was competitive, but Megan's Organic Market managed to make the cut.

As part of the application, market co-owner Megan Souza said they promised to donate a minimum of 20 company-sponsored employee service hours and $2,000 per month to organizations that benefit the residents of SLO.

It was the perfect opportunity for her to carry out community services ideas that she and the others came up with during their time with Leadership SLO on Legacy Project ideas that didn't come to fruition. Each year, Leadership SLO participants give something to the community: Souza's class developed educational signage for the city of SLO's hydration stations.

Another idea was putting a mural in the 40 Prado Homeless Services Center to inject more life into a facility that Souza said does meaningful work.

"It provides amazing services; it feeds, houses, and provides health care to a shocking number of people every single night," Souza said. 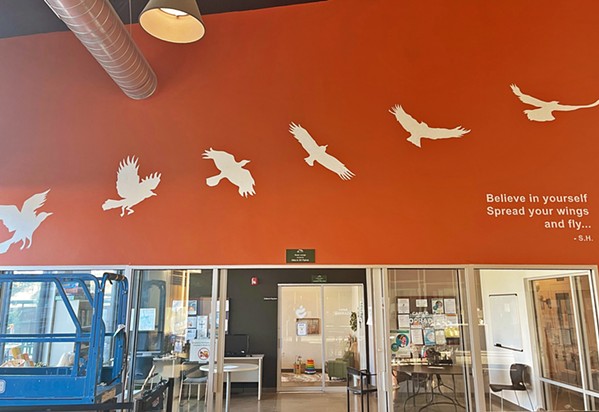 According to Friends of 40 Prado, a fundraising group for the facility, 40 Prado is the only full-time, 24-hour center serving the homeless population in the region. It's estimated that between 90 to 100 people stay in the facility and are provided with services and basic needs.

The facility itself is beautiful, Souza said, however, it's not lively.

"We were wanting to make it feel less institutional and more like a place where people hang out because it's frequented by people eating their meals, working on their resumes, and doing their work every day," she said.

Someone recommended that Souza work with local artist Abbey Onikoyi, whose works are jubilant with a vibrant color palette and subjects that are almost always in motion.

Contrary to his colorful portfolio, Onikoyi told New Times he painted the 40 Prado mural, which displays the stages of the flight of a bird, entirely in white.

"I felt the bird was almost saintly, so I felt it had to be very clear and very clean. I don't want to muddle it up with too much color," Onikoyi said.

If there was too much color or anything else going on, the mural's message would be lost, he said. The message he's hoping to get across is believing in yourself.

"I feel like having that white, very basic color, it allows people to put in whatever color they want to put in and whatever message they want to add to it," Onikoyi said.

Accompanying the bird in flight is a quote from a 40 Prado client: "Believe in yourself, spread your wings, and fly ... ."

Onikoyi said it's a very personal message that resonates with everyone on a deeper level, especially during the COVID-19 pandemic.

"It's so moving and uplifting. There is no better message than to begin the new year with believing in ourselves," he said.

Onikoyi spent a lot of time at the 40 Prado facility to work on the mural and said he was very inspired by the staff, but particularly by the people who received services there. He described constant laughter and camaraderie from individuals who come from varying situations but haven't lost their good spirits.

"I was inspired by the facility's operations and the unhoused individuals that know their situation is temporary. They know they can move on from there and believe in themselves to do so," Onikoyi said. "Life has its ups and downs, you know, but situations are temporary and change is meaningful."

• Arroyo Grande held a small ribbon cutting and reopening ceremony of the historic Bridge Street Bridge on March 12. The bridge served the community for more than 100 years, and in that time it acquired age-related deficiencies that would have caused its closure. In February 2020, the city awarded a construction grant to Granite Construction to rehabilitate the bridge while retaining its accessibility and historic value. In October of the same year, the city awarded a construction grant to Quincon Inc. for habitat mitigation on the creek. The $9.1 million project funded through the Federal Highway Bridge Program is completed and ready for the public. For more information, visit arroyogrande.org/521/Bridge-Street-Bridge-Project. Δ