Janna Nichols, executive director of the 5 Cities Homeless Coalition (5CHC), believes that the best way to overcome adversity is to keep moving.

So, in May, when the nonprofit's expansion plans at the Hillside Church property were derailed by a messy ownership dispute, Nichols didn't dwell on it.

"We have not paused," she told New Times. "We have all sorts of irons in the fire."

On Aug. 30, Nichols and 5CHC closed escrow on a property at 100 South 4th St. in Grover Beach, where it plans to house its new headquarters. With help from a $2.6 million state grant, 5CHC acquired the land for $875,000. The new, bigger digs will allow it to enhance and expand services, namely case management.

"This new office not only provides us a little more space, it provides us several more client meeting spaces," Nichols explained.

The building needs some renovations, so 5CHC's move isn't expected until early 2020. Until then, the organization, which serves those who are homeless or at risk of becoming homeless, will continue at its current office on 1566 W. Grand Ave.

Securing a new office space is one of three main objectives in the nonprofit's expansion plan—which is being financially supported by the California Homeless Emergency Aid Program grant. The other two goals are to acquire space for affordable and transitional housing and find a location for an emergency warming center. 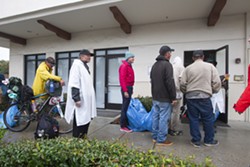 The full expansion was initially planned for the Hillside Church property on Newport Avenue, which 5CHC was in escrow to buy from the Christian and Missionary Alliance. But a swell of neighborhood opposition to the project, followed by litigation started over the church's ownership, threw the plans into limbo.

Nichols said 5CHC is actively looking for alternative locations for the housing and shelter aspects of the project.

"While [Hillside Church is] still in litigation, we are obviously looking at other options to satisfy each component of our proposal," Nichols said.

5CHC's expansion is an indication of both the nonprofit's growth and the increasing need for homeless services in the region. The decade-old 5CHC has come a long way since operating out of a 700-square-foot space, donated rent-free, for its first five years. The housing and homelessness crisis has only gotten worse since then, Nichols said.

"Now we're seeing over 1,000 families per year," Nichols said. "My dream would be that we'd go out of business. Unfortunately, I don't see that happening. We're seeing an increase of families needing assistance."