55 Fiction: Keep it short, keep it sweet, and if it’s good enough, you’ll read it this week

You can say a lot in 55 words. You can kill someone, love someone, or save someone. Tell stories about torture, divorce, or family drama. Make political statements. Riff on societal issues. But there are only a select few who can do it well enough to get published! For the last three decades, New Times and the Sun have brought you reader-submitted stories for the annual 55 Fiction contest. This year, hundreds of entries came from as far away as the Netherlands and as close as San Luis Obispo. Our 2018 judges include Proofreader Andrea Rooks, Senior Staff Writer Glen Starkey, Staff Writer Chris McGuinness, and Calendar Editor Caleb Wiseblood. So get ready for tales with surprise endings, lots of death, and a rabbit or two.

A Shot at Romance

"How about a refill?" he asks her. She moves to the stool alongside his.

"Sure. What's your name?" The bartender fills both shot glasses.

"Why, yes." She downs her drink, shoves some papers into his hand and heads toward the door.

The crane's cable had snapped. The Chinese take-out's elegant new marquis lay completely destroyed on the sidewalk, its fall hardly cushioned by the body underneath. The investigator pulled a slip of paper from a broken fortune cookie lying next to the victim, "Watch for a sign from above."

My family is a clock. My mother and father are the hands, crossing paths for only a second. My brother is the time, always changing. I'm the gears working hard to try and bring this family back together though I know this clock will be broken forever. For eternity.

Why Are You Telling Me?

I'm deaf, but I can still imagine and dream. I can hear nothing, but there's a crowd in my head. Words, thoughts, and dreams keep replaying in my mind. I'm only 5. I've always made the best of it, but I just want to hear my parents say, "I love you."

A Period of Inactivity

"Your palm, the cards, and your astrological chart, with progressions and transits, are all very consistent. I see a period of intense anger and denial, then, soon a prolonged period of ... inactivity. I see a funeral ... ."

"I'm not going to any funeral!"

"You'll definitely be at this one. I'll need payment in cash today."

"Tell us the story again!"

"He got tired, I kept goin', slow and steady wins—"

"No, the real story! Please, Grandpa!"

The elder sighed. His scaly beak curved into a smile: "That dumb ol' rabbit didn't know that I cut through the racetrack!" The reptiles exploded with laughter.

He's filthy. Baggy clothes. Mismatched shoes. Unkempt hair. He's black. I watch as the clerks eye him suspiciously. Customers veer around him. He strolls the aisle seemingly oblivious to their scrutiny. The front clerk calls for assistance. As the pimply assistant manager bravely walks toward him, I slip the bottle of perfume into my purse.

To Save the World

"Why is the world so evil?"

Daddy's brow furrowed with concentration as he buttoned his son's jacket, all the way to the top.

"Because it is a fallen world, condemned by God."

"Yes. You will see paradise. Now, remember: Let him get close before you press the button."

All I want to do is get home, and this jerk is creeping along in the dark in front of me. As I near my house, I swerve left and scream past the startled idiot. I flip "the bird" for good measure, and I glimpse the driver's shocked and familiar face.

He was drunk again and calling from jail. He directed her to his secret stash of cash. Fumbling, she found the wad of envelopes. It was then she noticed the lacy script of another woman. Love letters. Dozens.

The money would more than cover her ticket to Los Angeles. She packed immediately.

Who is that woman staring at me?

Her pasty face is disgusting; it sags like a melting marshmallow.

Her eyes are rabbit pink.

Her hair is a faded striped awning.

Oh God. There's an old man behind her.

Drifting in surf off the sand spit, I felt peace, connection, the movement of the swells. Without warning, I was rocked by an explosion of pain, ripping flesh, an unnatural force heaving me through the water. I blacked out. When I regained consciousness, I lay on a deck. I writhed, flailed, gills sucking air.

Literally. What a disgusting mess.

Then, the elevator started moving again. And opened on the next floor. The waiting crowd gasped.

"It was like this when I got in," I mumbled.

"And you stepped in anyway?"

Unbuttoning his pants, he eased the tattered recliner back and scratched his ample belly. "Why would she ever leave ME?" he wondered, belching loudly, taking another swig. With tobacco stained fingers, he wadded up and tossed her letter, eyes already transfixed on the Married with Children rerun, her crumpled heart falling onto his dirty boots.

"Four weeks ago, you couldn't move your left side. Now you're walking again. These medications will decrease the risk of another stroke."

"Why?! You could become totally disabled!"

"Because now I lean to the left when I walk. I'm a conservative. I want to lean to the right."

In my haze, I hear ... monitors beeping?

I sense pain across my chest, and involuntarily, I whimper.

A warm hand caresses my face.

His gnarled trucker's hand drops the fork, trying to feed himself.

Clanging pans mingle with antiseptic smells of the cafeteria. Reaching over, I wipe his chin.

The lump in my throat is painful. I climb into my rig. 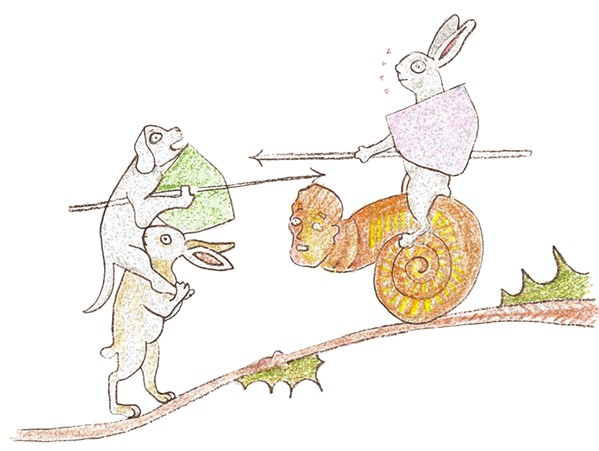 Blood stained the tile scarlet. Men wandered, their hair matted and red. Glass walled them in. A tide of chemicals enveloped the people, burning their flesh and ripping anguished screams from their lips.

"Experiment 401 complete," sounded a clinical voice. Standing over the table was a white rabbit in a lab coat.

They sought refuge from the sweltering heat under a tree. The two teenagers ate their shaved ice, hers cherry and his blue raspberry. Across the horizon was a setting sun, compelling the two to say what they've bottled up for years. Three, two, one. In unison.

The music danced in the air with me that night, wine inspiring my calloused feet. The basement dirt floor patted down from my nightly routine—wine, the mirror, the ... dress. Silk kissed my skin, so inviting, so sexy. Tonight "Jeremy" ends; tomorrow "Jessica" begins. I grabbed my disgusting manhood, and plugged in the saw.

The baby came through a vertical incision, a radical C-section. The mama couldn't walk for weeks and slept propped by pillows: her chest the baby's bed. They gazed out the window at verdant trees and nursed. The papa left two days after birth. She knew he would go, had already forgiven him. She sent photos.