"Caroline laughs and it's raining all day/ She loves to be one of the girls/ She lives in the place in the side of our lives/ Where nothing is ever put straight/ She turns herself 'round and she smiles and she says/ 'This is it, that's the end of the joke'/ And loses herself in her dreaming and sleep/ And her lovers walk through in their coats// She's pretty in pink/ Isn't she?/ Pretty in pink/ Isn't she?"

Few bands can bring back the feeling of the '80s with the ferocity of The Psychedelic Furs, an English rock band that formed in 1977 and came to the heights of their power during MTV's heyday. Formed by the husky-voiced Richard Butler with his brother Tim on bass, they developed in the British post-punk scene and scored hits like "Pretty In Pink," which inspired John Hughes' film of the same name, "Love My Way," "Heaven," "The Ghost in You," and others.

The Furs' origin story is a real pull-yourself-up-by-your-bootstraps thing. Butler was a college art student who decided he wanted to pursue music, even though he didn't know much about it. It was sheer force of will and an undeniably original streak of creativity that landed the band's early recordings on BBC disc jockey John Peel's show, where he called the Furs' first dirge-like songs "beautiful chaos."

Though their records didn't sell as well as many critics expected, the band was a darling of college radio and enjoyed a rabid cult following through the '80s. They eventually disbanded in 1992, and Butler formed Love Split Love with Richard Fortus and Frank Ferrer (who both later joined Guns N' Roses). Butler re-formed the Furs in 2000 and has been touring regularly ever since. Most recently, their song "Love My Way" was featured in the Oscar-nominated film Call Me By Your Name.

Should be a fun flashback! Australian singer-songwriter Mia Dyson promises to be a worthy opening act. Her most recent album, If I Said Only So Far I Take It Back, is filled with moody rockers—a perfect accompaniment to the Furs.

Also at the Fremont Theater this week is Bay Area rapper Andre Nickatina on Saturday, March 10 (9 p.m.; all ages; $22 at eventbrite.com or Boo Boo's). Billed as Andre's Birthday Bash, the show celebrates a hip-hop luminary who was born and raised in the Fillmore District of San Francisco and exploded onto the scene in 1993 with his debut The New Jim Jones. His reign has continued with a total of 18 albums.

A couple of more shows at the Fremont that may sell out are John Hiatt and The Goners on Monday, March 19, and George Clinton and Parliament Funkadelic on Friday, March 30. You may want to get on those ASAP. Check it out at fremontslo.com.

The weird and the wonderful 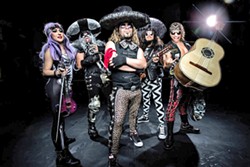 Over at Morro Bay's The Siren, Numbskull and Good Medicine Presents have a couple of shows lined up for you starting on Saturday, March 10, with Metalachi, a heavy metal and mariachi mash-up with an awesome fake bio (8 p.m.; 21-and-older; $17 presale at Boo Boo's or ticketfly.com).

"On a hot summer night in Veracruz, Mexico, circa 1982, Consuela Espinoza stumbled out of her dilapidated shanty and into rock 'n' roll history. What began as an innocent night of snorting horse tranquilizers in a hotel room with seven members of the village jai alai team went on to produce the greatest metal band to ever live. Unhampered by a steady regime of tequila and ill advised sumo lessons, nine months later five bastard children where born."

They would become ... Metalachi! Want to hear, say, Metallica's "Master of Puppets" or Van Halen's "Hot for Teacher" done in mariachi style? This is the show!

Breezy surfer dude and singer-songwriter Donavon Frankenreiter plays next Thursday, March 15, at The Siren (7:30 p.m.; 21-and-older; $25 presale at ticketfly.com and Boo Boo's or $30 at the door). He's touring in support of his newest album, The Heart.

"All these songs are as close to me singing from the heart as I can," Frankenreiter said in press materials. "It's a complete record; the songs are intertwined. I had to call it The Heart—that was the theme of the record."

Part of that inspiration came from his co-writer, the prolific songwriter Grant-Lee Phillips

"Grant told me, 'You should make the most intimate and honest record you've ever made,'" Frankenreiter said. "So these songs are simple and intimate and honest; they aren't cheeky. There are some ups and downs—I love writing positive songs and happy tunes, but there are some downers here. I feel like it's where I'm at, 42 years old. Every one of these songs means a lot to me. They're from the heart."

Country soul artist Petrella, who recently played to a sold-out crowd as the opener for the Motown act The Spinners at the Rose Music Venue in Pasadena, has two dates in Paso Robles this month, starting this Thursday, March 8, at the Pine Street Saloon (9 p.m.); and then on Saturday, March 17, for the St. Paddy's Day celebration at Chateau Lettau (6 p.m.). She'll be mixing covers such as Etta James "Lovin Arms" and Tony Joe White's "Ain't Going Down this Time" with her original songs.

Enjoy an authentic taste of Ireland when Celtic folk duo Four Shillings Short plays three $20 (brownpapertickets.com), all-ages shows at the Cambria Center for the Arts Theatre (1350 Main St.) starting Friday, March 9 (7:30 p.m.) with A Celebration of Ireland, featuring traditional Irish music, jigs and reels, poetry, and slow airs. On Saturday, March 10 (7:30 p.m.), witness The Celtic Year concert, following the Celtic Wheel of Time through songs, folklore, and poetry. And finally on Sunday, March 11 (2 p.m.), experience Around the World in 30 Instruments, where multi-instrumentalist members Aodh Og O'Tuama and Christy Martin will indeed play you around the world on 30 instruments!

Arroyo Grande's Clark Center wants to get you in the St. Paddy's Day mood early with their St. Patrick's Day In Ireland show on Saturday, March 10 (3 p.m.; all ages; $36 to $48 at (805) 489-9444 or clarkcenter.org). The Kerry Traditional Band will present songs from the Emerald Isle, and dancers Connor Reider, Keara Osborne, and the Kerry Dance Troupe will tear up the stage.

Retro act Unfinished Business performs their Beatles show this Saturday, March 10 (8 p.m.; 21-and-older; $15 at (805) 227-6800), at D'Anbino's. Fifty-four years ago, Beatlemania was sweeping the globe, and songs like "She Loves You," "I Want To Hold Your Hand," and "Twist and Shout" were huge hits. Unfinished Business will play those and other British Invasion artists such as The Rolling Stones, The Animals, The Zombies, The Hollies, The Dave Clark Five, The Kinks, Peter and Gordon, Gerry and The Pacemakers, The Who, and The Spencer Davis Group.

And while we're on the subject, the SLO Symphony presents a concert featuring the music of The Beatles and American composers such as Gershwin and Ives on Saturday, Match 10 (8 p.m.; all ages; $20 at (805) 756-4849 or slosymphony.org), in the SLOPAC. Andrew Sewell conducts with guest soloist Lindsay Deutsch on violin.