View a slideshow from the scene at Morro Bay.

The Monday following Thanksgiving weekend is a slog for most people. For Dean Foster, owner of the Bay Front Marina in Morro Bay, it was a nightmare.

On Nov. 30 at 8 a.m., Foster awoke to discover that one of the largest vessels docked in his marina—a 38-foot boat with a 300-gallon fuel tank—had sunk.

Nobody was in the vessel at the time, and it sunk in its regular docked position on the marina. 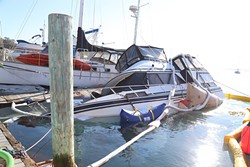 Foster reported the incident to the Harbor Patrol and Coast Guard, and responders arrived shortly afterward to contain the spill of pollutants. They surrounded the area with oil-absorbent pads, which turned red as the pads sponged up leaking oil.

Responders found a “through hole” in the boat, which was the most likely cause for its sinking. The hole might have been missing a necessary plug, but responders said the full story wouldn’t be determined until there was open access to the boat’s inside.

The owner of the boat could not be identified by New Times before publication deadline.

Marshall Liverman, a U.S. Coast Guard marine technician who was on site Dec. 1, refused to “speculate” further on who or what was responsible for the sinking. Possible penalties for the owner are not yet clear.

“It depends on a lot of things—the owner’s cooperation, prior history, and cause of the sinking,” Liverman said.

A local vessel rescuer, California Marine and Salvage, was hired by insurance company Boat U.S. to try and bring up the sunken boat. Efforts to save it have been painstaking and, as of the morning of Dec. 2, unsuccessful.

Jim Sanders, owner of California Marine and Salvage, spent many hours tying chains and ropes to the vessel, placing floatation devices under the boat, and setting up air compressors as part of the effort to bring the boat up.

“They spent all day [Dec. 1] situating everything,” Foster said. “It’s a slow process.”

In the late afternoon on Dec. 1, with daylight dwindling and the U.S. Coast Guard growing impatient, Sanders’ final push to get the boat upright and above water failed. The boat tipped over onto its side.

There was a faster but riskier option for salvaging the boat. They could have pulled it out of the marina, waited for low tide, and then towed it out of the bay, Sanders said. That option was ruled out because of the prospect of dragging oil through the bay in the process.

“For the sake of the bay, we’ll leave our gear in [for the remainder of the rescue effort],” Sanders said, clad in diving gear, following the unsuccessful effort.