A better kind of isolation: Amid closures at regional and state parks, local Hipcamps offer respite to those looking to get out and get away

Hipcamp is an app and website that allows property owners to rent out their land to campers. Check it out at hipcamp.com. Other camping options include SLO County facilities, which opened to all campers on Feb. 4. Check out the available sites at slocountyparks.com/camp. And Santa Barbara County parks camping information is available at countyofsb.org/parks/campingparks.sbc.

Driving just a few miles out of Arroyo Grande and up to Branch Mill Organic Farm feels like entering a better, calmer world. A little produce stand greets you at the entry of the farm, where the midday sun peaks through the branches of lush oak and fruit trees, burning away the few remaining drops of morning dew. The smell of fresh-cut herbs and blooming flowers fills the air.

A friendly black cat meows as he makes his way leisurely over to a nearby deck, where he effortlessly hops up onto the platform to rub his cheek against a post. Maybe, if you're lucky, he'll eventually meander over to you.

It's quiet and still and secluded here. It feels more than just 3 miles outside of Arroyo Grande and much, much farther from the screens and stressors that have come to define pandemic life.

Owner Ruth Madocks knows her land is special, and, fortunately for us, she's willing to share it. With Madocks at the helm, Branch Mill has become more than just a local organic farm, operating simultaneously as a community event venue, educational space, and, most recently, a private campground. 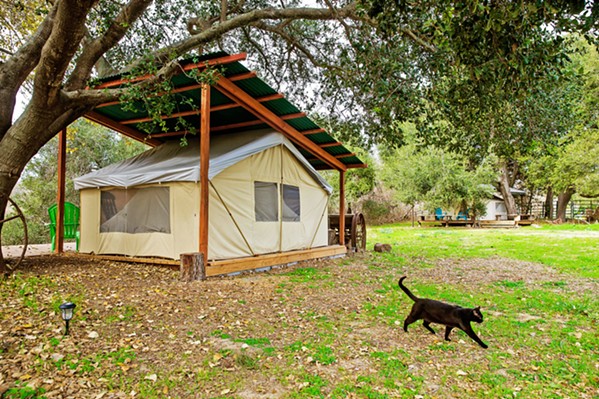 About two years ago Madocks signed up for Hipcamp, an app and website that allows property owners to rent out their land to campers. It's a similar concept to that of Airbnb: Landowners can make a little extra money on the side, and campers can experience a place that wouldn't otherwise be available to the general public. There are thousands of campsites nationwide listed on the app, ranging from cabins and glampsites that go for hundreds of dollars a night, to primal tent sites that don't even have bathrooms.

Hipcamp has been around since 2013, but it's gained popularity locally during the pandemic as repeated closures of state and county campgrounds left Central Coast residents without anywhere else to camp.

"It's really providing a service for people that's not available in other places," Madocks told New Times. "Even as we open up with COVID, still a lot of people would rather be here than be camping out at a place with a bunch of people they don't know."

Madocks has two sites on her farm that she rents out for $90 a night. With large canvas tents, beds, showers, bathrooms, and an outdoor kitchen all provided in the package, the Branch Mill Hipcamping experience definitely leans toward glamping. Visitors can tour the farm, feed the animals, and order boxes of fresh produce and eggs.

Recently her clientele has largely been made up of health care workers and families from San Francisco and Los Angeles looking to get outside. Kids in particular love the farm, and Madocks said that's true especially now, when they've spent so much of the last year cooped up staring at screens.

"The main thing is people love to bring their kids and get a tour and learn about organic farming," she said. "And so our goal is to make this an educational place. I feel like the Hipcamp fits in with that vision that we had."

SLO County's campgrounds are open to everyone now, but SLO County Parks and Recreation Director Nick Franco said the pandemic made for a roller coaster of a year.

All five, Franco said, closed for the first time due to COVID-19 on April 2, 2020. They reopened on May 18 to SLO County residents on a first come, first served basis, an effort to prevent nonessential travel. Then the campgrounds opened to everyone on Sept. 17 only to close completely a few months later at the beginning of December. On Feb. 4 of this year, SLO County's campgrounds once again opened to everyone.

Franco said closures had a serious financial impact. SLO County's regional parks are self-funded, meaning Parks and Rec doesn't get tax or general fund revenue to support staff or maintenance costs. With the campgrounds closed to tourists for much of 2020, Franco said SLO County Parks and Rec took about a $2 million hit.

That projected shortfall evened out a little bit when the county's campgrounds fully reopened in September and October of 2020, when Franco said they saw a 78 percent increase in camping compared to the same months in 2019. Now his department is looking at something closer to a $1 million budget shortfall.

With SLO County's sites fully reopened, Franco said Parks and Rec is doing some extra bathroom cleanings and trash pickups. Not much else needs to be done to keep things coronavirus safe, he said. The campsites are spread out, they're limited to small groups, and it's all outdoors.

"Camping in and of itself is pretty consistent with COVID restrictions," he said.

That's how Darin Fiechter sees it too. Darin and his wife, Sierra, own a 43-acre ranch near Buellton and Jump On The School Bus, a Santa Barbara-based wedding and wine tour transportation service. The couple just happened to sign up for Hipcamp about a month before COVID-19 hit and decimated their transportation business.

"Hipcamp is seriously how we stayed alive," Darin said.

At Freedog Farms, Darin and Sierra offer 10 campsites, where visitors can put up tents, RVs, buses, or cars. They have propane fire pits at each site and a big community fire pit, bathrooms, an art studio, and mineral tubs, and they offer tours, hikes, and fresh eggs.

The sites are all well spaced out and private, he said, and it's been busy through the pandemic. He's had visitors cry upon arrival because they could let their dogs off leash, or because they finally got their kids out of a tiny apartment somewhere in a nearby city. COVID-19 is serious and important, Darin said, but so is mental health.

"I think what's cool is that it allowed us to feel sane through all this," he said, "because people were coming and they were happy." Δ