SLO's urban forest has enemies, but it's safe for now 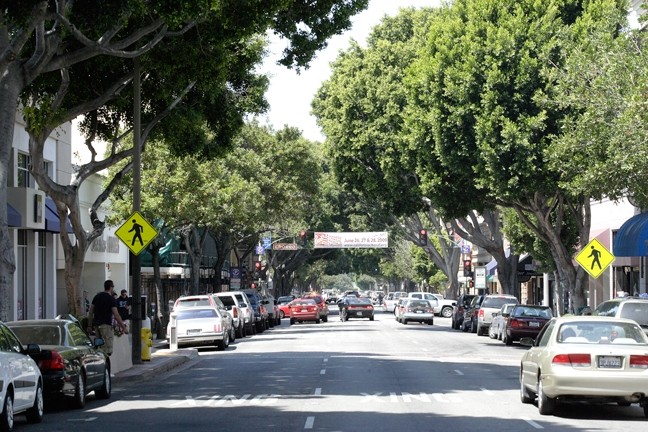 If a person listened closely to the hum of rumors circulating around the streets of downtown SLO, craning to hear whispers between the creaking of giant trees and the murmur of traffic, they might have heard the one about how the city’s downtown “forest” is due to be clear-cut.

If they listened particularly closely, they might have heard that a certain commerce-oriented organization wanted to remove the leafy canopy and plant trees that are little more than twigs in their place.

Is there truth in this rumor? There is some, but there’s no cause for panic.

The city does have a plan to remove all of San Luis Obispo’s vaunted downtown trees—someday. According to city arborist Ron Combs, at the planned removal rate it would take between 50 and 60 years before the last of today’s canopy is torn out.

While that’s a long time in people years, it’s not in tree years, and it would cut short—literally—the expected life span of many of the ficus and camphor trees that create street-covering canopies along, for example, the city’s main hub, Higuera Street.

Yet even that removal pace isn’t fast enough for some.

The rumor about plans to clear-cut the downtown were spawned eight months ago at an Architectural Review Commission meeting when Dave Garth, president of the SLO Chamber of Commerce, presented a slideshow comparing scrubby looking parts of SLO’s downtown with spiffier pictures of other cities.

He presented images of filthy sidewalks, newspaper racks with trash from a nearby business stacked on top, and downtown trees, which the presentation argued were not the right scale or fit for downtown. There were also slides making an argument for better tourism signage, and for repainting light poles. With the slideshow and a letter to the city, the chamber was pushing for money for “downtown beautification,” a term that had been coined during budget hearings.

Garth, who was taken to task on the issue in a recent New Times letter to the editor, acknowledged that the slideshow was where the rumor started. He said, though, that the presentation was about more than just trees; he said it was about the general condition of downtown and his opinion that parts of it really are a little rundown. The slideshow is still available on the chamber’s website.

“I had this slideshow,” Garth said, “which showed basically that if people look, how bad the area really is. Trees were just one of those things.”

But in San Luis Obispo, trees are no small matter.

The rumor mill started churning when a certain anonymous columnist wrote that the chamber wanted to get rid of the canopy. And, since nine of the 19 slides from Garth’s presentation were about trees, there was some justification.

The chamber’s slides showed small, tidy-looking trees in Napa, smaller saplings in Paso, and contrasted their neatness to a giant trunk downtown with dirt around it and the sidewalk beginning to heave. Then the Paso twig and a SLO monster tree were compared side by side. Then there was a comparison between the size of trees in Paso, relative to the buildings, and the same shot in SLO. Based on the slideshow alone, there should be no ambiguity about what the chamber values in a downtown tree.

The trees of particular interest are the ficus trees, which form much of the canopy that covers parts of Higuera Street. As the city’s arborist Combs pointed out on a recent day, however, the chamber doesn’t make decisions about the city’s urban forest.

Combs was sitting behind his desk atop a giant ball that he said helped his back—a problem since he’s been spending more time in the office and less time climbing trees. His computer monitor was propped up on a small stack of wood, the cross sections of a tree or two. If the city were planning to cut down trees, he said, he would have heard about it. In fact, the city has removed about 15 trees in the past two years, since an analyst identified the trees as dangerous. The rest of the forest, he said, is basically healthy.

Combs described the city’s policy toward removing downtown trees as conservative, but it’s too aggressive for some. Save Our Downtown representative Allan Cooper has said he’ll push for a moratorium on the cutting of downtown trees.

Combs said unless a tree poses a danger, the city plans to replace old trees with new ones at a rate no faster than one tree every two blocks, every two years, with a zero net loss of trees. And unless that policy is changed—it’s a design policy set by the Architectural Review Commission.

Still, when the city’s budget showed $50,000 allocated over two years for the urban forest, many people connected the dots: the chamber wants the large trees gone, and the city allocated money for trees. In fact, the two events are unrelated.

The money, according to Combs, is to plant more trees, as well as provide metal guards, referred to as “iron maidens,” for the smallest trees. The money will pay for grates to cover the trees’ roots, and pay to repair some sidewalks damaged by the trees.

Sidewalks are a particular concern to Garth, who said other species might be better than the ficus.

“When the trees get too large,” Garth said, “it can actually lead to all kinds of problems. The ficus have invasive roots that can crack foundations, they break underground utilities, the leaves clog roof drains. … The reality of it is that the buildings deteriorate.”

The trees are, of course, living things. They require maintenance, but Combs dismissed the idea that roots break water pipes. What’s more likely, he said, is that a leaking pipe attracts the root, which will eventually cause more problems.

So, there aren’t any plans to clear-cut the city’s trees, but opponents can be forgiven for worrying. Just about every other issue addressed on the slideshow got funding from the city under “downtown beautification” plans, which will pay for such things as news racks, trashcans, painting light poles, and new signage. In other words, what the chamber wants, it often gets.