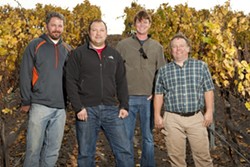 This year my husband Dan and I will enjoy the traditional Thanksgiving meal in a fine restaurant. I haven’t chosen exactly which one yet, but doubt it will be difficult to get reservations. Most people prefer sharing this bountiful meal at home with family and friends. In all honesty, I hate the laborious preparations necessary to make a roast turkey and it never turns out even close to tasting like my grandmother’s. She made those soulful meals most years during her 93-year life, and that’s a helluva lot more practice than I’ve had. But after years of foiled attempts, which only result in feeling like I’m the turkey, I’ve thrown in the dishtowel. And Dan doesn’t have to listen to his exasperated wife cussing like an old sailor over the spoilt meal.

I look forward to writing this column every year. It’s so much fun calling on Central Coast vintners to ask what’s on their table this Thanksgiving. I love hearing their stories; they’re always entertaining. I only regret I didn’t wheedle them into inviting me to sit down at their bountiful tables, but I wouldn’t dream of interrupting their special family day.

Vintner Gary Eberle, one of Paso Robles’ pioneering winemakers who started there in 1973, believes there’s a far better way to cook the big bird than in the oven: “I cook the turkey on the same grill I use to cook the tri-tip that I barbecue for our winery parties.”  On Thanksgiving Day Eberle typically prepares dinner for 40 family members, and has each year over the past 13 years since he married Marcy Eberle. He said it requires one 30-lb. whole turkey and two nine-pound turkey breasts which he brines 24 hours ahead of time. “We invite both of our families. Mine consists of one, me, and all the others are her relatives,” the jocular vintner noted. “We’ll have all the sides from garlic mashed potatoes and sweet potatoes to the green beans and the green jello.”

His different style of cooking turkey, however, totally blew away his new wife’s family the first year they hosted Thanksgiving dinner. “My grandma, a rancher in Arroyo Grande, almost had a heart attack when she walked in the kitchen, opened the oven door, and the turkey wasn’t in it,” Marcy chuckled in remembrance, clearly having fun enhancing his story. “Gary uses an inverted stainless steel salad bowl to cover the turkey while it cooks. And he uses the type of sprayer you’d normally use to kill garden pests but it’s never been used that way. He sprays the turkey with a marinade of red wine, soy sauce, and olive oil while it’s cooking.”

With 48 lbs. of turkey on the grill you definitely need a bigger baster.

Gary continued: “When Marcy’s family came into the house they were all panicked. I told them the turkey cooks so much faster (two hours) without cooking the moisture out of it. The spray is a nice marinade for it and it ends up with a nice smoky char. Once everybody tried it, they came back for more.”

When it comes to wine pairings with the bird, Eberle remains unconventional. “Before dinner I pull up old wines and current ones. The ladies enjoy sipping viognier. But at the dinner table there’s only one wineglass and only one wine every year, our syrah rosé. If someone insists on red, I provide an old standby, Saintsbury Garnet pinot noir. But the full-bodied syrah rosé is so festive looking and stands up to the cranberry sauce. After dinner everyone drinks zinfandel and cabernet sauvignon.”

My longtime friend, winemaker Lane Tanner, said that this year’s Thanksgiving is a family affair at her sister Susan Beckman’s home. Family of winemakers, that is: Lane, now winemaker for the new brand Lumen in Santa Maria Valley; her husband Rick Hill who makes wines for Tantara and his own brand Labyrinth, both in in Santa Maria Valley; and Steve Beckman, winemaker of his family’s eponymous brand in Santa Ynez Valley. “We’ll bring some Lumen chardonnay and pinot noir (now available at Woodstone Deli in Avila Valley), Labyrinth chardonnay and viognier, and they’ll open some Beckman rosé for me because I love it.”

Susan Beckman, formerly pastry chef at the Buellton Hitching Post, and Steve will be preparing a wet-cured ham from a Berkshire pig named Bubba that was raised on their ranch. Susan noted that Steve added that they’ll enjoy Lane and Rick’s wines along with their Beckman grenache, and a Chateauneuf-du-Pape from France with the ham. Susan will be making the famous crack pie, a rich salty pie from the New York City restaurant, Momofuku Milk Bar: “It’s a sort of custard pie baked in an oat cookie crust, which I heard is the best thing ever cooked in a pastry kitchen. Maybe it’s as addictive as crack!” The recipe can easily be found on Google.

To get more wine pairing ideas this year I asked two notable Edna Valley winemakers to suggest their wines that will have a prime spot on their Thanksgiving table: Mike Sinor, winemaker for Ancient Peaks and Sinor-LaVallee, simply said Tolosa 2011 syrah seasonal selection.

“I typically start off with beer, Lagunitas and Bear Republic IPA, then it’s on to J sparkling brut rosé,” he explained “We do either a smoked turkey or Georgia cured ham with all the traditional fixings. I’ll have either our 2012 dry riesling or dry gewürztraminer, and a 2004 or 2007 vintage of our Twin Creeks pinot noir. We’ll also have an assortment of pinot noirs from all over California:  2010 Drew Fog Eater Anderson Valley, 2010 Sinor-LaVallee Rincon Vineyard, and 2010 Flying Goat Bien Nacido Vineyard. I’m hungry just thinking about it.”