A Boys and Girls Club reborn

Give a kid three hours of unsupervised free time every day, and he or she will probably get into all kinds of trouble. The possibilities are endless: fights, matches, dangerous intersections, creepy grown-ups, stores with rows of candy that can quickly and quietly be shoved into pockets. Many older kids with nothing better to do and no one to stop them will eventually try to find excitement in alcohol, drugs, and sex–activities that could trap them in a cycle of jail stints, single parenthood, and struggling to make rent on minimum wage for the rest of their lives. 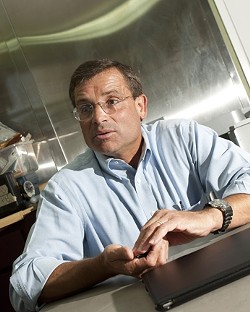 The Boys and Girls Club of South San Luis Obispo County aims to offer kids and parents another option. The nonprofit operates out of three sites in the Five Cities area, running programs intended to fill the gap between school getting out and parents getting home from work. For the most part, kids do homework, play video games, make art, and run around outside.

But in the years since the local chapter’s 1995 inception, a sort of malaise had spread through the program, according to Francisco Curiel, who took over as executive director in April. He said in a phone interview that too much money, time, and attention has been focused on flashy attractions like video games and pool tables, so he’s spent the last six months compiling data and establishing community partnerships in an effort to give the club experience a clear purpose, create a long-term strategic plan, and provide measurable results.

“We need to do that fun, high-profile stuff, but that’s just to get them here,” Curiel said. “The whole purpose is to provide direction. I’ve been asking, ‘How do we make this more meaningful?’”

He had more than a few ideas.

A self-described data man, Curiel also began tracking attendance and analyzing it in new ways. In September, 264 kids used the club, and many went every day. Curiel discovered that the club was losing members after eighth grade and needed to do more to attract teens. Such data wasn’t available six months ago, and Curiel can use what he’s gathered to estimate how much snack food he’ll need to provide at each site and the success rate of new activities.

Take the teen center’s new iLab, for example. PG&E donated $10,000 to buy 15 iPads for the Boys and Girls Club. Rather than let kids play with the things at random, Curiel partnered with the Mac Superstore to train club staffers and load the tablets with software that’s fun, engaging, and educational.

“Education is everything,” Curiel said. “That’s the ticket out. If it weren’t for education, I’d probably still be working in my parents’ bakery.”

Jordan Cooper, a recently hired education coordinator, said Curiel introduced multiple new activities that feature a focus on education. There’s a Money Matters class that teaches teens how to handle their finances, a program that counsels teens on which classes they need to take in order to get into college, and Project Kitchen, which is still in the works.

The kitchen at the Oceano Teen Center consists of little more than a sink and a run-down refrigerator, and Curiel said he’s working to get a working stove so local chefs can come in and teach cooking classes. Ideally, kids would then get together once a month to whip up an elegant, three-course meal and sell plates to their parents and the public to raise money for more activities.

“I can say with confidence that he came in with plenty of ideas,” Cooper said.

One of Curiel’s biggest qualms with the current state of the club is the fact that the teen center’s new $70,000 playground isn’t regularly accessible to younger children who would actually enjoy it. He wants to open the center on Saturdays for younger kids, and he wants the Sheriff’s Department to pay for it. “Sheriff’s Saturdays” would also include a monthly visit from deputies with interesting jobs like the K-9 unit, bomb squad, and horseback emergency evacuation team.

Sheriff Ian Parkinson was open to the idea of sending deputies and hoped it would improve the community’s relationship with law enforcement.

Parkinson was less sure about giving any money. Curiel was hoping to get $6,000 from the department’s asset forfeiture fund, a pile of money taken from busted drug dealers. Parkinson suggested that Curiel approach the Sheriff’s Advisory Council, a separate, nonprofit corporation that raises money to supplement law enforcement effort. As of press time, no agreement had been reached.

The Boys and Girls Club gets guaranteed funding from Bright Futures and the Office of Juvenile Justice in the amount of $150,000 per year, according to Curiel. The rest is raised through donations. Revenues listed on guidestar.org totaled $343,000 in 2010, and gathering that kind of cash can keep a director busy.

As part of his ongoing effort to reach out the public, Curiel threw a “friend-raiser” at Ventana Grill on Oct. 16, inviting high-profile community members like Katcho Achadjian to meet the club’s staff, parents, and kids. The club received its first ever $10,000 donation from someone at the event.