The Lucia Mar Unified School District is the only public school system in SLO County with a full three weeks off for winter break. Colleen Martin has been pushing to change that for years.

"It's been one of my pet peeves for a really long time," Martin told New Times. 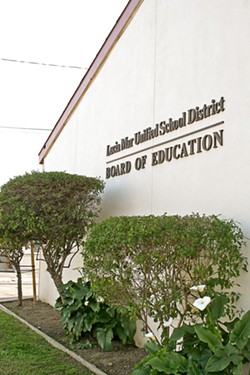 Martin is a college and career technician at San Luis Obispo High School in the San Luis Coastal Unified School District and has simultaneously served on Lucia Mar's Board of Education since 2006. Working in neighboring districts has provided her a front-row seat to the varying challenges that teachers, parents, and students in each district face.

In the Lucia Mar district, Martin said, the calendar is a problem.

At a Lucia Mar Board of Education meeting on Jan. 21—the first meeting since winter break's end—Martin said she heard complaints from a number of parents regarding the length of the break.

More than half of the students enrolled in the Lucia Mar school district qualify for free and reduced lunches, and Martin said those families struggle to make up for the lost meals during an almost month-long vacation. A lot of parents can't get that much time off work and find it difficult to secure child care for their younger children, and although the city and county provide kids' programs to help out, Martin said those don't usually run all three weeks.

Most other districts in SLO County let kids out for winter break on Dec. 23, and return to school on Jan. 6 or 7. Atascadero Unified students returned to school on Jan. 8 this year, and Lucia Mar students weren't back until Jan. 13. The only nearby districts with longer breaks are in Santa Maria, where students in both the high school and elementary school districts returned on Jan. 15.

At the Jan. 21 meeting, Martin's fellow board members smiled knowingly as she once again shared her concerns. This has long been a sticking point for her.

"I always say I'm not going to leave until this gets through," Martin told New Times.

But the issue isn't quite on track to being resolved.

The district's calendar for the 2020-21 school year has already been decided, and it again includes a three-week winter break.

Paul Fawcett, assistant superintendent of human resources, said the district's school year schedule is determined by a calendar committee made up of parents, teachers, and staff. The committee, he said, surveys all three stakeholder groups and works to evaluate the calendar.

Most feedback regarding the district's current structure, he said, has been positive.

But Martin said it's teachers who really want the lengthy break, so that they can visit their families for the holidays and follow that up with a vacation.

"Well, that's pretty elitist," Martin said, adding that most families in the Lucia Mar district won't be out skiing for three weeks.

Some of her fellow board members agree—although she wouldn't say who—but Martin said this issue will likely get overlooked in the next year or so, when Lucia Mar and other districts in California will be making major scheduling adjustments in order to adhere to a new law that pushes school start times back to 8:30 a.m.

Schools must be in compliance with that law by July 2022, which is right around the time Martin's current board of education term ends. Whether she runs for re-election could depend on the length of Lucia Mar's winter break.

• Cassandra Wagner was recently named the Community Foundation San Luis Obispo's new director of grants and programs. Wagner previously served as grants officer for William and Flora Hewlett Foundation, where she led the grant making and scholarship programs by working with nonprofits and county leadership. Wagner brings with her experience in grant making, program development, and cultivating local partnerships.

• Hospice of SLO County recently received $10,000 from a benefit concert featuring Patrick O'Hara's band, Young Ireland, that was held in downtown SLO on Jan. 19. Attendees were invited to make donations throughout the night, and 100 percent of the proceeds went to Hospice SLO County. Δ