A century's worth of wisdom

Three Judson Homes residents share their thoughts as they turn 100

After bearing witness to multiple wars, countless natural disasters, and the deaths of many loved ones, Dorothy Goerke, Dorothy Woolpert, and Walter Ruksenas still have smiles on their faces. 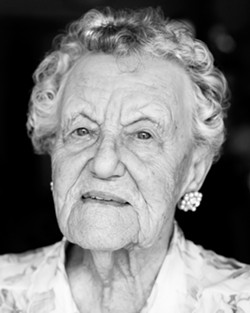 # The three all residents of Judson Terrace Homes in San Luis Obispo are celebrating their 100-year-old birthdays within months of each other.

"Everybody tells me it's an accomplishment. I don't know why I've lived so long. People say it's such an inspiration. We're inspirations to the rest of you," Goerke said.

Born in 1907, Goerke is the oldest person at Judson Terrace and also the fastest with her walker. On July 19, she became the first resident to reach 100. Woolpert is the next oldest her birthday is on Aug. 13 and while she may be losing her hearing, her mind is still sharp. She has a 40-year active membership in the League of Women Voters.

"Well, you have to have key interests," she said. "For instance, I'm very interested in politics. So every day I have an incentive to get up and look at that paper, watch my television, to know what's happening in this world. And also, I enjoy the game of bridge, which I think really keeps that old brain working. I had a very good [bridge] partner who also lived to 100, and she used to say, 'Dorothy, when people don't like bridge, they tend to slip away.'"

With more years of life comes more experience, enjoyment, and more to overcome. Ruksenas, who turns 100 on Dec. 20, has overcome much.

He's lived in five countries and has seen many wars. He only had two years of schooling, each in a different language. He worked on a farm for the first part of his life and later he worked as a mechanic. He finally made it to the United States in his late 60s.

"I've started a new life five times and changed my name each time," he said.

Woolpert agrees that hardships have their place in life, but at nearly 100, she can choose which memories to embrace and which ones to release.

"I've had lots of happiness and lots of sorrow like everybody. I'm not any different, but I happened to survive each thing. And here we are now at 100," Woolpert said. "Mine is a happy story. I'll say the '50s and the '60s were sort of the peak of everything. When we started the '70s, it calmed down and my husband died and my daughter died and things were hard, so I don't think of those decades very much, but the '50s and '60s were happy."

Woolpert attributes a piece of her happiness to a simple pleasure: music. 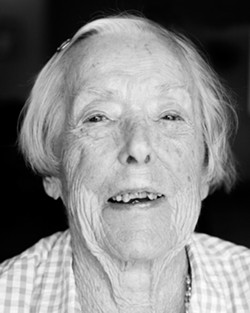 # "I can look back, and I have lots of music in my life, lots of music. I played the violin and I loved it. And I loved all the music that I heard," Woolpert said. "And you know, when I have on my TV and the musicians are playing, I get the vibrations!"

Centenarians are still rare, but not as rare as they used to be. According to the National Institute on Aging, the number of people reaching 100 is growing rapidly. In 1950, only about 3,000 Americans were 100 or older. By 1999, at least 70,000 had attained the mark.

Judson Terrace Homes was founded in 1970 as an affordable housing option for seniors by Paul Ray, former pastor of First Baptist Church of San Luis Obispo.

"There is one thing that has been very helpful, and that's this place, where I have lived now for 16 years," Woolpert said. "It's lifted a lot of problems that other people have that we don't even think about."

Aside from their basic residence, each of the three agrees that exercise has helped them reach or approach triple digits.

"Of course in my early life, I never did smoke, I never did drink. I did a lot of work and exercise. I think that probably had a lot to do with it," Goerke said.

And despite their years or perhaps because of them all three have a sincere interest in the people around them and the events happening outside of their home on Augusta Street.

"I worry about the country, the troubles we're having, and I hate to finish my life with the country in such condition as it is. I find that very depressing to me, and when I get that feeling, I just take my walker and I go outside and I take a nice walk. I like to walk up and down Augusta and see the people and the cars, anything that's going on," Woolpert said. "I sort of have an escape from that feeling. I'm always glad to sort of have a little relief. Either be with my kids or my grandkids or my great grandkids. It's really fun to be alive."

Asked for his advice, Ruksenas demurred at first: "My advice is not very good. It's like a mechanic without his tools."

But, pressed, he offered this: "If you treat people well, they will treat you well in return. I wish for people to live in peace and respect others. With respect, we all can progress."

Meagan Dupre is a New Times intern. E-mail comments or questions to the editor at rmiller@newtimesslo.com.