For a relatively little town, Santa Barbara takes its films very seriously. In addition to boasting an impressive lineup of selections ranging from regional to international, the Santa Barbara International Film Festival, now in its 27th year, will also host 37 American and 16 world premieres—among them Darling Companion, starring Diane Keaton and Kevin Kline, and the Samuel L. Jackson thriller The Samaritan. The event is also cleverly timed just weeks before the Academy Awards. And though the official Oscar nominees weren’t announced until two days before the Santa Barbara festival’s opening, the SBIFF’s lineup of honorees has traditionally had a weird knack for predicting these things. (This year, the festival will host over 20 nominees.) But despite the event’s considerable star power, its relaxed setting and intimate venues somehow keep it from feeling too pretentious. 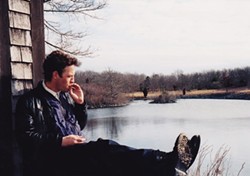 It helps, too, that a Hollywood contact high isn’t even the festival’s biggest thrill. A smorgasbord of good cinema, much of it previously unseen on the Central Coast, is what makes this event a worthwhile destination. In addition to the usual film categories offered, four sidebars are new this year, divided along social and cultural lines. “Cinema Nouveau” will shine a spotlight on emerging French directors. Kolnoa, Hebrew for “cinema,” includes eight documentaries reflecting on the Jewish and Israeli experience.

Screen Cuisine, a category highlighting the sustainable practices of farmers, chefs, and entrepreneurs, contains several surprisingly powerful documentaries, such as Nothing Like Chocolate, the story of an anarchist chocolateer, and Cafeteria Man, the tale of a rebel chef. In Taste the Waste, German filmmaker Valentin Thurn travels around the globe to see what people in the United States, Europe, Japan, and Cameroon are doing to stop the enormous amount of food being wasted each year (nearly as much as the food being eaten.)

Another newly christened category, Cinesonic, presents a collection of feature films on iconic musicians. (Its centerpiece event is the world premiere of an original score to F. W. Marneau’s 1926 silent film Faust, performed by Santa Barbara alt-rock band Gardens & Villa.) There’s plenty more to be said on the subject of actual films, but let’s get the exciting celebrity stuff out of the way first, so we can all relax.

On Monday, Jan. 30, the festival’s American Riviera Award will go to Martin Scorsese (Hugo, the HBO Documentary George Harrison: Living in the Material World), marking the first time a director has received the honor.

On Sunday, Feb. 4, The Cinema Vanguard Award, a category created to recognize actors who have taken significant artistic risks and made unique contributions to film, will honor Jean Dujardin and Berenice Bejo, who star in the silent film The Artist.

For her portrayal of housemaid Aibileen Clark in Tate Taylor’s The Help, Viola Davis will receive the festival’s Outstanding Performer of the Year Award, presented on Friday, Jan. 27.

Christopher Plummer, who starred in the 2011 film Beginners as Hal Fields, a man who, after his wife’s death, announces to his son—played by Ewan McGregor—that he is gay, will accept the Modern Master Award, the festival’s highest honor.

And now, our feature presentations …

The festival opens with the world premiere of Darling Companion, directed by Lawrence Kasdan, on Thursday, Jan. 26. Diane Keaton stars as Beth, who saves a bedraggled, lost dog from the side of a Denver freeway. As Beth deals with an empty nest and distracted, self-absorbed husband Joseph (Kevin Kline), she and the rescued animal develop a special bond. But when Joseph loses the dog after a wedding in the Rockies, the ensuing search—a synopsis reads—“takes them in unexpected directions—comic, harrowing, and sometimes deeply emotional.”

The event’s Centerpiece film is the American premiere of Samsara, an unconventional documentary from director Ron Fricke and producer Mark Magidson, whose previous projects Baraka and Chronos proved that visual and musical artistry can play a far more important communicative role than any explanatory dialogue. Samsara, a Tibetan word for “the ever-turning wheel of life” promises spellbinding images of “sacred grounds, disaster sites, industrialized zones and natural wonders.”

Closing the festival is Where Do We Go Now?, director Nadine Labaki’s second feature. Set in the Lebanese countryside, in an isolated village surrounded by landmines—the leftovers of a bloody conflict—the film centers upon five women determined to protect their loved ones from future strife through a series of unconventional methods. 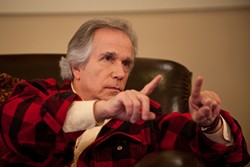 “Where Do We Go Now? offers new twists on thematic motifs widely addressed in popular Lebanese musicals from the sixties, revisiting questions familiar to the country’s postwar cinema with refreshing and unflinching lucidity,” the program reads.

A new music category, largely comprised of documentary features, will provide a glimpse into the life and work of musicians of many different genres. There is Live at Preservation Hall: Louisiana Fairytale, from director Danny Clinch, which documents the collaboration of the legendary Preservation Hall Jazz Band and the American rock band My Morning Jacket, and the ways in which this 50-year-old New Orleans jazz group is inspiring a new generation of musicians. In another vein entirely is El Medico: The Cubaton Story, the tale of a young Cuban doctor trying to make it as a Cuban Reggaeton (Cubaton) singer-songwriter. Meanwhile, his mother, a Castro supporter, “reminds him of his debt to the revolution, his compatriots, and Cuba’s world-renowned medical system.”

Another doc in the Cinesonic category, Rhino Resurrected, tells how a ramshackle record store, Rhino Records, a haven for hardcore music misfits since the ‘70s, would achieve cult status as the launcher of many careers, the pioneer of the boxed set, and—after accidentally producing a hit single—grow into a record label cherished by music lovers around the world. 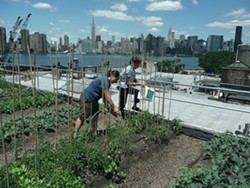 Rhino was a place with attitude, where the music-geek staff might argue bitterly with the clientele over their musical taste—even creating a “worst customers” list and hanging it prominently on the wall—and yet people kept coming back, again and again. When founder Richard Foos set up a pop-up store in L.A., attempting to replicate the vibe of the original, musicians and music geeks turned out in droves. Among them was director Keith Shapiro.

“I immediately felt like there was something going on here, and I borrowed my friend’s camera and started shooting. I thought it would be kind of a fun, cool thing,” Shapiro told New Times. “But before you know it, it’s all these well-known people coming through the doors. It was an amazing collection of people, and the more I talked to all of them, the more I realized how special this place actually was. It was nothing but surprises, because the story just kept getting more and more convoluted and interesting.”

Live performances by the likes of Dr. Demento, Nirvana, the Stooges’ Mike Watt, and the Temple City Kazoo Orchestra make this world premiere one to watch for.

On a related note is Cure for the Pain: The Mark Sandman Story, directors David Ferino and Robert G. Bralver’s exploration of the life and music of Mark Sandman, reclusive frontman of the “low-rock” band Morphine.

Morphine, an unusual rock trio with a sound unlike any other (no guitars, but a two-string slide bass, drums, and two saxophones) was beloved by critics but still outside of the mainstream when Sandman suddenly passed away of a heart attack.

Jeff Broadway, who produced the film, is also a second cousin of the late Sandman.

Sandman’s life and music, said Broadway, were profoundly affected by a family tragedy that occurred when the musician was in his 20s—something the bassist and singer kept very private, preferring to channel his emotions into his art.

“He was a bit of a mythical, cultish, rockin’ figure in my family,” Broadway told New Times. “I always appreciated the music, but as I got older, and after he died, I really started getting into him as a musician and as a lyricist and as a songwriter.”

Sandman may never have received the fame he deserved, but his distinctive style would leave a mark on his generation, as interviews with prominent bassists Les Claypool (Primus), Mike Watt (The Stooges), and Josh Homme (Queens of the Stone Age) illustrate.

Though not in the same category, Louise Palanker’s Family Band: The Cowsills Story is its own kind of rockumentary. It’s the story of a wholesome-seeming family band, the Cowsills, who rose to prominence in the ‘60s with several hit singles, TV specials, and appearances on Ed Sullivan. The band even served as the real-life inspiration for The Partridge Family. But behind the heartwarming image was a tyrannical, abusive, alcoholic father, six terrified kids, and a mother unable to stand up for them. Cheated out of their money by the time the band finally fell apart, the Cowsill children disappeared from the public consciousness entirely. Palanker’s quest to find out what happened to them resulted in the making of the film.

“My opening question was, ‘What happened to the Cowsills?’” said Palanker. I didn’t set out to tell a cautionary tale about what happens to children in show business. I just wanted to find out what happened to their family, and everything else was just sort of revealed along the way. What I discovered kind of told the story of the Baby Boomer generation. The idea was, let’s look perfect …There were a lot of secrets and pain that was not being dealt with. The Cowsills personified that, by being the face of the American family that sings together…It was not acceptable to not be perfect.”

Eight documentaries on the Jewish and Israeli experience around the world comprise the festival’s new Kolnoa category. There is Nicky’s Family, the nearly forgotten story of Nicholas Winton, an Englishman who coordinated the rescue of 669 Czech and Slovak children before the outbreak of World War II—then didn’t mention his efforts again until, over 50 years later, his wife discovered a suitcase in his attic containing the transport plans.

Igal Hecht’s The Hilltops follows the lives of three female activists in the West Bank hilltops, the frontier of the Israeli-Palestinian conflict. Filmmaker Sigal Emanuel documented the life of Reut, a young Israeli girl moving from one place to the next, ultimately ending up on the street, in A Place of Her Own. 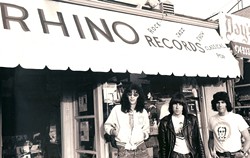 Hollywood screenwriter and first-time director James Freedman presents the world premiere of Glickman, a fascinating story of Martin “Marty” Glickman, a Jewish-American athlete turned legendary sports broadcaster. After anti-Semitism excluded Glickman, then a runner on the American 400-meter relay team, from a likely victory at the 1936 Nazi Olympics, he went on to become a sports broadcasting legend, revolutionizing the field and mentoring two generations of sports broadcasters.

“He was not allowed to run in the Olympics because we were appeasing Adolf Hitler, who didn’t want to see a Jew on the victory stand,” explained Freedman. “And it was a foregone conclusion we would win that relay race, and we won by 15 yards. And unfortunately, because World War II broke out, Marty never had another chance to run in the Olympics. That was taken away from him. But you can go two ways when you’re 18 and someone takes your life’s dream away: you can become very bitter, or you can become a Mensch. And Marty Glickman became a Mensch.” ∆