Whether 'two camps' exist in Morro Bay may be debatable, but the coming election promises a few surprises 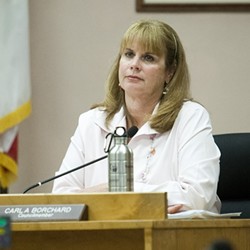 If it’s true that all politics are local, the political battle to watch this election season is undoubtedly being carried out in Morro Bay.

With the June 5 primary less than a week away, as of this printing, the eight local candidates seem clearly split along the “pro-business” and the “progressive” camps.

The races to fill two city council seats, and to peg a mayor, come during a time when Morro Bay residents are grappling with some of the most polarizing issues in the city’s history. A possible fight with the California Coastal Commission over the proposed wastewater treatment plant, tensions between business owners in north Morro Bay and on the Embarcadero, and debates over whether environmental concerns should outweigh economic revitalization efforts, or vice versa—all of these are splayed out in front of the candidates.

In the city’s mayoral race, you have two incumbents: three-time mayor Bill Yates and his challenger, two-term councilwoman Carla Borchard. And there are two challengers: Jamie Irons, a former planning commissioner and current technician at the Morro Bay power plant, as well as Joe Yukich, owner of Osaka Joe’s Sushi in north Morro Bay.

Seeking to hold on to his council seat is landscape contractor Noah Smukler. Vying for the council seat to be vacated by either Smukler or Borchard—or perhaps both—are Jim Hayes, a retired sewer technician; community volunteer Christine Johnson; and hotelier Joan Solu.

Here are some of the issues:

• The Wastewater Treatment Plant project: Councilman Smukler voted against the hiring and subsequent renewing of a consultant’s contract to lobby coastal commissioners on behalf of the Joint Powers Agreement with the Cayucos Community Services District, and told New Times the body shouldn’t continue pursuing a “flawed” new location.

Hayes said he is against moving the plant at all.

Yukich, on the other hand, said he didn’t want to comment until the JPA gets its latest response from the Coastal Commission.

Irons said updating the 25-year old city general plan could alleviate some conflicts over the project.

• Economic redevelopment: Every candidate said attracting tourism dollars and business retention were among the highest priorities for the city.

• Aging infrastructure: Despite the city’s efforts, one of the consistent pleas from citizens is to fix city roads that have long been in disrepair.

• Sign ordinance: A controversial uniform ordinance to rid the city of excessive business signage has been seen as a success on the Embarcadero. But not everybody is happy about it.

Small businesses in the northern part of the city, for example, say the signs are necessary to their businesses’ survival, such as along Highway 1, when potential dollars fly by at 55 miles per hour.

“That was the catalyst for why I ran,” said Yukich. “It’s a monumental thing for me. We need to be supporting these businesses.”

Hayes said, “That’s something I think they probably need to go back and reassess what they’re doing.”

Asked about the issue, Johnson said, “In the end of the day, it’s all about how we can help existing businesses in Morro Bay.”

But perhaps one of the stand-out issues in the election is the notion, perceived by many, that candidates are split among “pro-business” and “pro-community” factions. Of course, some candidates take issue with that.

“That’s baloney,” Yates said. “They can paint it with as wide a brush as they want, but for me, it’s always community first.”

Borchard said the “two camps” theory is a distraction from greater issues.

“I think that the more we create divisiveness, the less we get accomplished,” she said. “It creates a situation that doesn’t really exist.”

“It’s really uncalled for,” Hayes said, adding that he’s heard the concerns of business owners on the north end of town, particularly in regard to the recent crackdown over signage regulations. “Once this election is all done, we’re still going to be neighbors.”

Others readily admit the city is divided, pointing out that it seemed clear from the first candidate forum, held in early May, that the candidates had picked their respective sides.

“It’s definitely a fact, but both sides will deny this,” Yukich said. “Some of these grudges go back years.”

Solu was not available for comment as of press time.

As of press time, one final mayoral debate was scheduled prior to the election. Yukich is set to square off against Yates at 4 p.m. on June 3 at Yukich’s business, Osaka Joe’s Sushi, at 3118 Main St. in Morro Bay.

Staff Writer Matt Fountain can be reached at mfountain@newtimes.com.