About 50 homes line the park, evenly spaced up and down four narrow lanes. Row by row, the boxy mobile homes—mostly painted white or in soft pastel colors—vary from having empty, well- kempt yards to spaces full of appliances, bikes, or other ordinary household collectables. Some have potted plants; others have barbecues, American flags hanging from the outer walls, or a tree house. 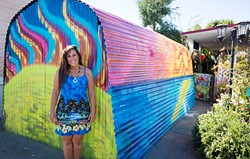 Then comes a garage that pops out as soon as you approach it. A brightly colored mural covers the small structure with an arched corrugated metal roof. The front door has a yellow sun with orange and pink wavy rays; part of the sides are painted in shades of blue, inspired by the ocean; and the roof depicts a sunset with yellow, orange, and pinks close to magenta and fuchsia.

Pamela Dailey stores her car in the garage, which she said has been there for about a decade. In August, friends helped her paint it to commemorate the death of her nephew, Clint Gilbert, who was 23 when he passed away two years ago. For Dailey, it’s a way to bring something beautiful to her surroundings.

“When I look at my yard, it’s my serenity, it’s my peaceful haven,” Dailey said.

The garage sits at the entrance of her space, which also has a large shaded patio area with potted plants, water fountains, and several cats lounging about.

There’s a reason behind why Dailey painted her garage and why she maintains her yard—she is currently coping with chronic lung issues, including a diminished lung capacity and a mix of severe asthma, bronchiolitis, and bronchiectasis. Dailey, who said she’s never been a smoker, said that conditions like hers can often be fatal. The health conditions forced Dailey to retire in 2000 from a career working in the offices of both the San Luis Obispo County District Attorney and the Probation Department. The garage is part of her efforts to create a therapeutic and relaxing atmosphere.

A few neighbors, however, think the garage doesn’t belong. Complaints brought on the attention of park management, things escalated from there, and Dailey was given an ultimatum—paint over it in a park-approved solid color or be evicted.

For years the garage was painted battleship gray. After that paint job was ditched for the mural, Dailey said she got “compliments galore” from neighbors. But Dailey also received a courtesy notice form filled out by the park’s manager, Maurice Barr.

“We would suggest that you perform the above improvements within 10 days,” read the form, dated Aug. 14. The “Other” option was checked, with a hand written notice to “paint unattached garage in solid inoffensive [sic] color.”

A few days later, Dailey received a letter dated Aug. 18, from the Yorba Linda-based property management firm J & H Asset Property Management Inc., which took over management of the mobile home park after it was sold earlier this year.

That courtesy notice, signed by property manager James Joffe, asked Dailey to “please repaint the storage shed at your place,” and to submit the paint choice to the park for approval before doing so.

Neither Joffe nor Barr returned New Times’ calls for comment, and no one answered after a knock on the office door at the park, though it was after the posted 1 to 4 p.m. office hours.

After receiving the warning letter from Joffe, Dailey left the garage as is. Then, on Sept. 14, she received another letter that was neither as brief nor as polite as the previous.

“You are in violation of the above stated rule as evidenced by the multi-color paint on your storage shed,” the letter read. The letter cites California Civil Code that states that a tenancy may be terminated for breaking park rules.

The letter also told Dailey that if she didn’t repaint the garage within seven days, then they would give her a 60-day eviction notice.

Residents of the park say that there have been active efforts to clean up the park—several people got notices to clean up trash or remove certain items. Dailey received a previous notice, as did her neighbors, to remove Christmas lights (which she did). The process began after the previous owners, who lived in Arroyo Grande and kept an onsite manager, sold the park to a group of investors who charged J & H Asset Property Management Inc. to take over management.

So far, many of the changes have been welcomed—a few tenants that were the source of repeated problems including alleged drug use and criminal activity, were evicted, and the park is generally spruced up. Some issues persist, but all in all it was a needed process, according to some residents.

Dailey feels that she is unnecessarily caught up in that process, however, because her garage is functional, passes codes, and, in her opinion, beautifies the park.

“People have different tastes in art,” Dailey said. “If you don’t like it it’s fine. I may not like your taste in art, but I don’t complain about it.”

One of the neighbors who spoke to New Times about the garage and also lodged a complaint with park management has a different way of looking at it.

“It looks like the 1960s,” said a woman who identified herself as J.B. “I don’t think it’s appropriate in a mobile home park unless we’re all going to degrade our property.”

J.B. said she was happy that the park was getting an overhaul, and that Dailey’s garage should be part of it.

“As it is, this place has had a bad reputation, and they’re cleaning it up,” J.B. said. “They’re doing a heck of a job.”

J.B.’s neighbor also took issue with the garage, but didn’t want to stop and talk as she wheeled a red wagon back to her home after depositing some trash or recycling in the bins at the other end of the row.

She did offer one comment, however: “I hope to hell she changes it.”

So far, 38 park residents signed a petition that says Dailey’s mural is beautiful, brings them happiness, and should stay. Dailey was also asked to sign a lease, after not having one for several years.

For now, Dailey plans for herself, her cats, and her colorful garage to stay put. If the situation escalates any more, Dailey is not sure what her next move will be. Asked if she’d paint over the garage, or move elsewhere, she said: “I don’t know, but I do know that it’s taking a toll on me.”