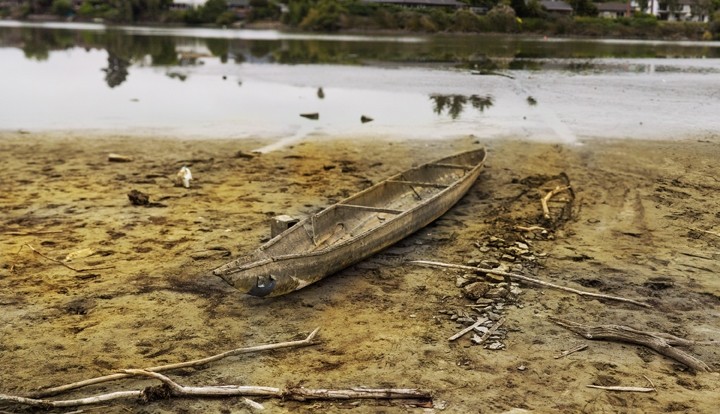 Docks surrounding Laguna Lake lie in the mud, tilted at angles that would make them difficult to walk on, much less launch a boat from.

“We like to joke that we’ve got beachfront property,” Rob Davidson, a lakefront resident, quipped about the mud banks created by the shallow water.

Davidson and many of his neighbors are pressing city officials to do something about Laguna Lake’s shallow water level.

Robert Hill, the Natural Resources Manager for San Luis Obispo, has put together a plan to restore and manage the lake and its surroundings over the next 10 years. The City Council will vote whether to approve the plan on July 15.

Hill said the fundamental problem is sediment filling up the lake. All lakes fill over time, but because Prefumo Creek, with its greater water flow, was routed into Laguna Lake in the late ’50s, the lake is filling at a rate that will see it change significantly within a generation.

In order to address this issue, the conservation plan calls for the lake to be dredged—workers would remove sediment from the bottom of the lake. Hill stressed that any dredging must also include ongoing sediment management; otherwise the lake will simply fill again.

Dredging would keep the lake at a level that would allow more use in the summer. The plan also raises the possibility of using recycled water from the wastewater treatment plant to keep levels up during the warmer months.

Davidson and fellow lakefront resident John Smigelski see Laguna Lake as an underdeveloped and underutilized resource. They pointed out that multiple groups use the body of water now, including a model yacht club, car clubs, and kayakers. The surrounding area also plays host to birdwatchers, dog walkers, and people seeking to enjoy the natural surroundings. Maintaining the lake will promote these activities—and greater use—they say.

Hill said that the lake and the land surrounding it are important habitat for a variety of animals and plants, including several threatened species. When designing the plan, Hill considered the desires of the community for a lake and park that can be enjoyed year round, as well as a viable habitat for wildlife.

Economic benefits to the city, from increased tourism and property taxes, were also mentioned as reasons to promote Laguna Lake upkeep.

Not all of the plan’s details are worked out yet. A major problem the project faces is determining where funding for the dredging would come from. Costs are estimated at more than $10 million for the 10 years it covers. The plan proposes that some money would come from the city’s general fund, that the city would apply for grants, and that a special yearly tax would be placed on property owners who live near the lake. Lakefront house owners could pay as much as $958 per year, while residents in the immediate neighborhood could pay as much as $389. The tax would have to be approved by 67 percent of those affected. Determining if passing such a tax would be feasible is an important first step in the plan, Hill said.