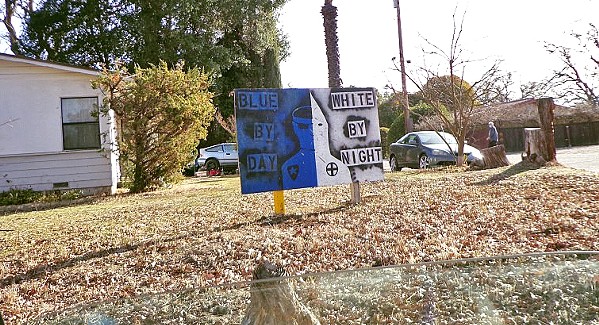 A large sign indicating that police officers are "blue by day" and "white by night" showed up on an Atascadero resident's lawn, prompting Police Chief Bob Masterson to ask for an open dialogue with the sign's creators. On Jan. 14, the Atascadero Police Department posted a photo of the sign, which juxtaposes a silhouette of a police officer against one of a Ku Klux Klan member, on its Facebook page with a statement from Masterson.

Masterson, who joined the Atascadero Police Department on Dec. 8, 2020, told New Times that he was taken aback when several community members alerted the city about the sign.

"My first thoughts were quite frankly that, I don't think that there are any racist officers in Atascadero. My first thought is clearly that is what the sign was reflecting, officers were cops by day and part of the KKK by night," Masterson said. "It was kind of disheartening for me to see something like that."

In the Facebook post, Masterson said he believes that everyone has the right to freedom of speech, and that he initially wanted to reach out to the residents directly to start a conversation.

"I want to understand their opinions and whether they feel it is reflective of our local Atascadero Police Department. After careful consideration, I decided I would not want my actions to be perceived as interference with their freedom of speech," Masterson's Facebook statement read.

He told New Times that he also didn't want his actions to be perceived as hostile, and that Facebook can often be used as a tool for community dialogue.

"Smart response Chief Masterson - let whomever has such serious accusations against our police come forward and put a face to their complaints," Facebook user Ruth Erin Lewis commented on the post.

Katie Leigh Brennan, another commenter, said, "That's not freedom of speech. That's terrorism. It's put there to threaten and intimidate."

From being a police chief in Kern County to a director of a faith-based nonprofit that provided gang prevention to youth, Masterson said that through his 34 years in law enforcement he hasn't seen or experienced a lot of racist officers. But he acknowledged, there are "bad apples."

He said he was raised to treat everyone equally and especially in law enforcement, where he and others took an oath to do that.

"Knowing the reputation of Atascadero, I mean, when I applied for this agency I did my research and by all means, everyone I spoke to said Atascadero Police Department has a very excellent reputation," Masterson said. "Let's face it, race and racial issues used to be something we didn't talk about. I think when we stopped talking about it is when we lost the ability to have decent conversations and people have become so bifurcated on issues."

The Police Department updated its initial post, stating that the occupants of the residence where the sign was placed weren't in town when the sign went up, were unaware it would go up, and have since removed it.

Masterson said he still hasn't heard from the sign's creators but he welcomes meaningful conversation. Prior to the COVID-19 pandemic, he would have told anyone from the community to join him for a ride-along to learn what he and other officers in the local department do. For now, he said, residents can still have a COVID-safe conversation with an officer.

The community, he said, should feel safe with the Atascadero Police Department because it treats everyone equally.

"It's a hard profession we have, and we see the worst of society, a lot of the times, and yet the attitude and the disposition of my officers seems to be stellar for the vast majority of the time," Masterson said. "They can go out and see the absolute worst atrocities, and they come back the next day with a smile on their face, seeing what they can do to help society. That speaks volumes to their heart." Δ