A couple dozen film fans braved the rain to attend a food- and drink-filled Oscars party at the SLO Elks Lodge!

It’s Sunday, Feb. 22, and the SLO Elks Lodge is slowly filling up with film fans as the red carpet Academy Awards pre-show screens on the many flat screen TVs in the bar. 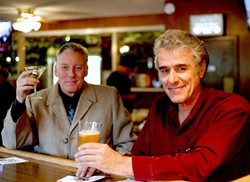 My wife, Anna, and I have laid out a spread of pizza, veggies, cheese and crackers, and chips and dip, augmented by some more delicious fare brought by other attendees. The drinks are flowing, and it’s hard to hear the TVs above the din, but no one in this crowd seems too interested in who’s wearing Vera Wang or Zac Posen this year, especially my pal Bob Whiteford, former Insomniac Video owner and Take Two Live co-host.

“Hey Oprah, go to hell!” Bob yells at the TV screen. Then, when they preview American Sniper, “You made $300 million! How about putting it into a war chest to pay for the G.I.s who are killing themselves?”

“I find them pretentious, boring, self-delusional,” Bob says. “What I like about them is they’re ridiculous and filled with clearly creative people, so they’re fun—even when they shit the bed or lay an egg, they’re still entertaining. I guess it’s a love/hate thing. I mean, giving a statue to say one artist’s work is better than another’s? It’s bullshit!”

Geesh, Bob. Tell us what you really think!

John Wheaton, a local actor and dance teacher who racked up three TV commercials, a short film, and a TV pilot this year, is a little more forgiving as we watch Lady Gaga pay tribute to Julie Andrews.

“I think she’s acquitted herself quite well,” he offers graciously, before taking a jab at her amorphous white dress: “I thought the state Legislature banned single-use plastic bags.” 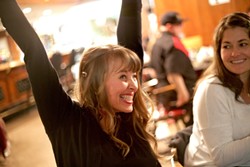 Meanwhile, Cyndi Hafley and I are going mano-a-mano on our Oscar ballots, neck and neck on our winner picks … until she pulls ahead and the serious gloating begins. I’m gunning for you, Hafley!

In case you didn’t watch, the Oscars go on forever, with 24 categories stretching over nearly four hours. Eventually, Palm Theatre owner Jim Dee decides it’s time to go, so he leaves his ballot in my capable hands. Soon, it’s a real horse race between Jim, Cyndi, Cheri DePaulo, and Midori Feldman, who also left because “it’s too noisy in here.”

Hey, we’re an excitable crowd! Speaking of which, there’s local sculptor Lindsay Wilcox blinding me with her bling. She’s wearing a cocktail ring the size of a ping-pong ball, and she’s hanging with her stage actor husband, John Pillow, who, if you squint, looks like Robert De Niro. I think the only flashier attendee here is belly dancer Amy Harway, who’s sporting a sleek black velvet dress and a sparkly tiara because that’s how she rolls. 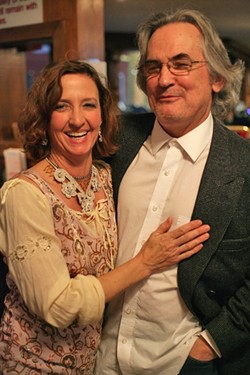 Suddenly, I pull ahead of Cyndi in the ballots, and she’s shaking her fist and swearing at me. This gal takes her competition seriously. I slip away to say hello to the table of sanity— Nancy Craig, Karter Hischke, Connie “Blues Chick” Booton, and Bonnie Trahan—who are behaving like adults and soaking in the Hollywood glitz. Only Connie filled out a ballot, and she’s not too worried about it.

Soon, it’s coming down to the final four categories, and I’m still ahead of Cyndi by two. We both move ahead with Julianne Moore, but then we both incorrectly guess Michael Keaton for Best Actor. Sorry, Cyndi, but it’s all but over when I pick Alejandro G. Iñárritu (Birdman) for Best Director while Cyndi went with Richard Linklater (Boyhood).

Even after I incorrectly call Boyhood Best Picture and Cyndi correctly goes with Birdman, it’s too late. I’m up 17 to 15! Woo hoo!

Don’t take it too hard, Cyndi! You tied with Jim, Midori, and Cheri, and you would have had to split the pot anyway.