When a barista from Skipper's Brew Coffee House in San Luis Obispo hands you your Mexican mocha packed with a spicy chocolate kick, you'll see pronoun pins next to their name tag.

You might also notice that their face covering is designed with a flag of their choice, such as the pride rainbow flag, the progressive flag, or the nonbinary flag. 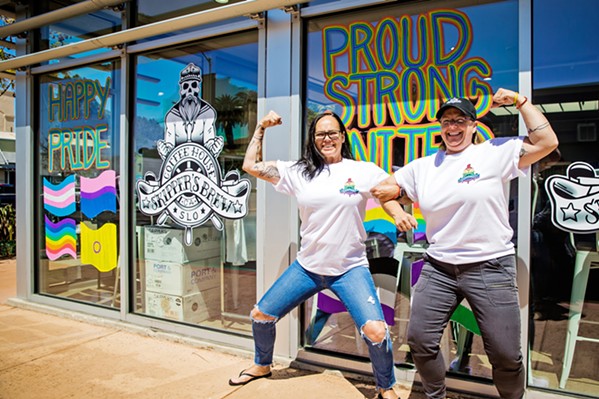 It's a small way in which Shari and Karen Rubino make their coffee shop a safe space for LGBTQ-plus community members and the greater San Luis Obispo community. These are just a few of the steps that the Rubinos took to really create a family of employees, neighbors, new friends, and collaborations.

And Skipper's Brew is exactly the kind of place that the Gala Pride and Diversity Center was looking to support in the San Luis Obispo area.

While reevaluating its efforts, the organization took into consideration the results of the Queer Community Action, Research, Education, and Support (Q CARES) Needs Assessment directed by Cal Poly psychology professor Jay Bettergarcia and a team of professors, students, and community members.

The goal of the needs assessment is to engage with individuals and communities through community-based research to understand barriers to mental health care and develop innovative solutions.

"[The report] told us that one of the biggest things that's missing in [SLO County] is an LGBTQ-plus affirming safe space, such as a coffee shop," Call said.

Gala made it a goal to find an affirming safe space by the end of 2021. But as fate would have it, the following week Karen reached out to notify Gala that Skipper's is LGBTQ-plus affirming. Call immediately worked with the coffee shop owners and spread the word through Gala's community forum and social media platforms.

"Everybody was so excited to have somewhere to go and because we've all been so isolated in COVID-19," she said. "One of the first things we've noticed is that when we come here we see other people that we know in the LGBTQ-plus community, and that happened almost immediately."

Call said meeting at Skippers is one of the main ways the LGBTQ-plus community has reunited.

Aside from Skipper's mission to be a safe space and displaying the pride flags or inviting decor in their SLO and Morro Bay locations, Shari and Karen said their goal is also about creating a welcoming family for their employees.

"Growing up, we didn't have a space for ourselves. I knew I wasn't straight, but we didn't have a word for what I was at the time. Now we're pretty much out, loud, and proud. We try to do everything we can for the community in SLO and Morro Bay," Shari said.

Shari, a San Jose native, and Karen, an Australian native, were looking to open a wine bar and introduce coffee to the menu at a later time. After searching for the right location, they stumbled upon a coffee shop for sale in Morro Bay in 2019. They decided that the wine-focused business could wait because a coffee shop was ready for them.

In maintaining the momentum of a successful ownership transition and keeping the business fruitful during the pandemic, the Rubinos decided they wanted to expand in late 2020.

During a visit to SLO in November 2020, the two were driving down Monterey Street and saw an open space for lease with a landlord who was looking for a coffee shop to fill the vacancy. They got the keys just weeks later, and after some renovations, the two opened their SLO Skipper's Brew location in 2021.

Shari and Karen say the pieces really fell into place for them when it came to buying their initial coffee shop, expanding, and building a community along the way.

"I think that's how a business thrives, it's definitely the community," Karen said.

Shari said that they seek connection with the patrons of their shop—either the owners or their employees would know their whole life story.

"It's everybody. It's not just a coffee shop, it feels like home," she said. Δ