Perched at the peak of Islay Hill is a large beige statue of a cow standing on its hind legs. The cow peers carefully through a pair of binoculars while hanging off a large wooden pole. Out of context, this is a strange addition to the picturesque view of the Islay Hill hike. However, for Bruce Brandenburg and 12-year-old Shane Blume, she’s is just one of the cows they visited during their quest to see all 101 cows featured in the CowParade SLO County.

The pair was matched together by the Big Brothers Big Sisters program about eight months ago, when Brandenburg decided to take Blume on a tour of the cow statues.

“What worked out better than anything is when you’re in the car, and driving that long and that far—reversing course and trying to get things done—you get to understand each other a lot more,” Brandenburg said. “I’m trying to show him that anything is possible in life, and that’s why we did it.” 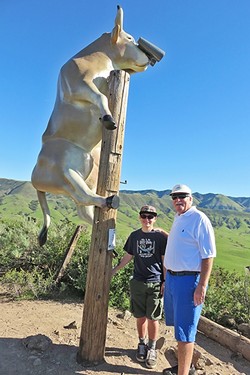 According to Angela Tahti, the executive director at Arts Obispo, Brandenburg and his “little brother” Blume are the first (to their knowledge) who visited all 101 cows featured in the CowParade.

“It’s great that [Bruce] took his little brother out. It’s a great thing to do,” Tahti said. “It was a fun thing for people of all ages.”

“It was a cow quest, it was an adventure,” Brandenburg said. “We got to go all over the county and have some great breakfasts and lunches. We got to know each other, and now we know each other! Objective accomplished.”

Spreading this endeavor over 10 trips that each lasted around five hours, Brandenburg drove Blume out on the weekends to visit each of the creatively designed fiberglass structures. Each trip was dedicated to visiting a handful of cows, and they even enlisted the help of others to document the trip. While most of the photos feature the smiling duo, some of the photos capture Blume in the middle of saying “moo!”

“It was fun learning about Shane and from the cow standpoint, we got to see the entire county,” Brandenburg said. “All the cows are different, people that we talk to where the cow is being shown all had a story … every time we took a picture was a fun little event—each one had a moment.”

The CowParade allows local artists to showcase their talents on a unique kind of canvas. Painters, sculptors, craftsmen, and architects as well as creative and artistic individuals submit designs influenced by their own backgrounds, cultures, histories, and artistic license. Each of the 101 cows are life-sized and weigh about 125 pounds.

Paying tribute to Highway 101, all of the cows in the CowParade will be auctioned off to benefit charities in the area. The CowParade SLO County Charity Auction will be held in Santa Margarita at Ancient Peaks Winery’s Oyster Ridge on May 6.

Funds raised from the other cow statutes will benefit the California Mid-State Fair Heritage Foundation, The Land Conservancy of San Luis Obispo County, Arts Obispo, and other nonprofit organizations in the area. Bid on the cows online or at the charity auction event. Ticket prices for the auction range from $99 to $120 and can be purchased at cowparadeslo.com.