A cross burns in Arroyo Grande

In the early morning hours of March 18, an 11-foot-tall cross was set ablaze outside the window of a 19-year-old African American woman in Arroyo Grande, according to police reports. The Arroyo Grande Police Department is investigating the cross burning as arson and a hate crime. 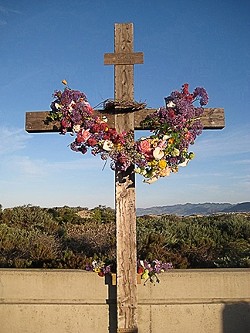 Police were called to South Elm Street in Arroyo Grande at 12:30 a.m. and found the burning remains of a cross in the lot adjacent to the girl’s window.

Arroyo Grande leaders faced a strong backlash from comments reported in the media that a police commander had said the cross burning may have been a “prank.” Such comments drew a stern response from the Santa Maria/Lompoc branch of the NAACP, which issued a statement that “while some might see this recent cross burning as a ‘prank’ we are reminded that history tells us that the use of cross burning has always been used as a tool for the intimidation and harassment of racial minorities … .”

Annibali told the City Council on March 22 that his department “had always pursued this as an arson and a hate crime.”

Police said the burnt cross was the same cross that had been stolen from Saint John’s Lutheran Church sometime between Feb. 5 and March 5. Church members weren’t aware the cross had been stolen for about a month, police said.

“I just don’t understand,” he said. “Why would anyone take what has become a symbol of love and do this?”

The 100-pound cross was made for a local production of Jesus Christ Superstar and was bolted to the ground in a small garden next to the church, except for when it was taken into the church for Lent and to a beach for Easter sunrise service.

Ouimette identified the charred remnants of the cross at the Arroyo Grande police station. He recognized an etching in the remnants that had been carved into the base of the cross: PHIL 4:13. It’s a reference to a Bible verse, Philippians 4:13, that reads, “I can do all things through he who strengthens me.”