Lance Canales takes us along for a flute ride

New Times How did you start playing the flute? 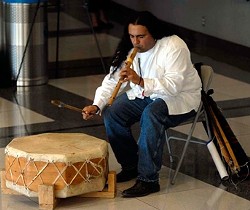 Lance Canales This may sound weird, but when I was a young kid I heard the sound of the flute in my head. I figured out what it was and talked to some of my elders and they encouraged me to play—and I have been playing traditional flute ever since.

New Times How many years has it been since you first picked up a flute?

New Times You live in Fresno … why do a flute workshop in Cambria?

Canales I love the Central Coast, and I used to play live music in Morro Bay, Cambria, San Luis Obispo—at Linnaea’s—at other coffee shops and various live music venues around the county. And at galleries and at farmers markets.

New Times I read that you bring forth a spiritual quality when playing the flute … tell me more about that.

Canales The flute is made up of the same idea as life. A human being is made up of the earth and sky. We have to rely on the earth to eat and the sky to breathe and our bodies come from the earth and our spirit comes from the sky. You need both to have life. The flute is the same way. It’s made up of earth and wood, and when you breathe into it you are breathing life into it, the spirit into it. You are creating life and the vibrations from the wind into the flute create the sound, and that is how the music comes from the flute. It’s a spiritual act, playing the flute. It’s a spiritual healing tool.

New Times You have recorded albums, as well … where can we find your music?

New Times What do you want prospective workshop attendees to know about the Native American flute workshop?

Canales There’s something for everybody … if you have never played the flute and have always wanted to … we will go over the basics. If you’re experienced, then you will learn about the spiritual aspect of the flute. You will learn techniques to further your playing abilities.

New Times What kind of genres of music is played on the flute?

Canales You can play any genre. Folk works well with native flute, I add it to a lot of my modern folk ballads I play. Believe it or not, you can actually play blues. It is in the same note scale.

New Times I have read that the Native American flute has a very distinct sound. Why is that?

Canales It has a lot to do with the construction of the flute. The way it’s made, when you breathe into it, the air goes across this 45-degree angle cut in the wood and because of that, it has a sound that most flutes don’t have. Also, the type of wood is thicker. And the note scale makes it distinct, as well. It’s more of a flute than a whistle. The Native American flute is one of the oldest instruments, but we can’t say it’s the oldest because every culture has some type of flute: Japan, China, even the Middle East, Ireland, Africa, Wales.

New Times After the workshop, you are performing a concert for the public. What can we expect?

Canales I will play acoustic music. Some Delta blues with a heavy native influence. I will be talking about my culture, and singing about it. I will also sing and play modern folk. Americana type of music; I call it Native Americana.

Christy Heron is only as good as her last envelope. Rat her out to Tony Soprano at cheron@newtimesslo.com.