Cambria cries fire but the county isnâ€™t buying it.

Ralph Covell sat in his kitchen, surrounded by dozens of figurines of farm animals, tapped his boot on the linoleum floor for emphasis, and said, â€œTwo and two isnâ€™t making four right now. It doesnâ€™t make sense.â€? Covell is pissed, and he has the right to be. Cambria is stealing his land. Covell bought his 1,500-acre ranch near Cambria in 1998 and moved there in 2000. When he placed the ranch under a conservation easement, he thought his undisturbed Monterey pine forest would be protected forever. He was wrong.

#This fall the Cambria Community Service District (CCSD), using eminent domain, condemned a parcel of Covellâ€™s land to build larger water storage tanks to use in fighting wildfires. Initially, Cambria was going to build a single 1-million-gallon square tank on the same Pine Knolls lot where Cambriaâ€™s two circular tanks currently stand. Now the CCSD instead plans on building two smaller tanks that will use the existing lot as well as 7,350 square feet of Covellâ€™s Monterey pine forest. And the CCSD says itâ€™s going to do this without the required permits and in the face of legal objections from Covell, the California Coastal Commission (CCC), and the San Luis Obispo County Planning and Building Department.

CCSDâ€™s â€œcome hell or high waterâ€? approach has alienated neighbors, angered local and state government agencies, and set a dangerous precedent for the future of conservation easements and the permitting process.

â€œA conservation easement is the best known tool we have [for conservation]; it is forever,â€? said Kara Blakeslee, who negotiated Covellâ€™s easement for the Nature Conservancy as well as the Hearst easement for the American Land Conservancy. A conservation easement is essentially a promise not to develop oneâ€™s land and to protect its natural resources. Easements are tailor-made for each individual or group and often result in tax breaks for those who place their land under such an easement.

The California Coastal Commission is questioning the legitimacy of what the CCSD is calling an emergency.

â€œAn emergency is defined as some unforeseen event that happens that threatens life or property, and thatâ€™s not the case here,â€? said Peter Douglas, CCC executive director. â€œTheyâ€™ve known that theyâ€™ve had to replace their tanks for a while. If they have an emergency relative to the existing tanks, then they ought to take steps to beef those up.â€?

â€œI think the real reason the district wants an emergency permit is because that allows them to avoid the CCC,â€? said Sarah Christie, CCC spokeswoman. â€œItâ€™s highly doubtful that the project would qualify for a regular permit.â€?

The CCC and some conservationists worry that the future of easements as well as the permit process will be thrown into jeopardy if the CCSD builds the tanks without permits.

â€œIf simply the threat of a natural disaster qualified as an emergency under the Coastal Act, think of all the development that could happen along the Central Coast,â€? said Christie.

When Covell bought his ranch he was an unlikely candidate for setting up a conservation easement. Covellâ€™s ranch contains one of five rare Monterey pine forests in the world, three of which are on the California Coast. The other two are on islands off of Mexico. According to the Nature Conservancy, the forest on Covellâ€™s ranch has been described by scientists as perhaps the most important of all five because of its natural pristine condition and rich genetic diversity.

Covell, who raises Clydesdale horses, has been a rancher all his life. Although he recognized the importance of preserving the natural state of the ranch for years to come, he thought it best to keep the ranch in his family, but talks with Kara Blakeslee and the Nature Conservancy eventually changed his mind.

Now some of the very land and trees that Covell set out to protect through an easement could be leveled for a public works project. Covell says if itâ€™s this easy for the CCSD to take his protected land in the name of fire safety, then who or what is going to stop it from taking more land in the future? And this could set a dangerous precedent.

About 6 miles north of Cambria on Highway 1 is the Hearst Ranch, perhaps the largest and most important piece of land ever placed in a conservation easement. The Hearst easement will open up 18 miles of coastline and preserve some 82,000 acres. But conservationists are concerned that if the CCSD sets the precedent that conservation easements donâ€™t stand up to eminent domain and public works projects, then the integrity of future easements will be questioned; making land holders, like the Hearst family, hesitant to agree to such conservation deals.

Everyone agrees that Cambria has a water problem, said Covell. And any water shortage can hinder fighting fires. Covell said he was working with the CCSD and the California Department of Forestry to help solve the problem. He offered the CCSD a section of his land to build a dam to help fill the communityâ€™s water needs. Since then Covellâ€™s met with the fire chief to plan firebreaks on his property.

But Covell said heâ€™s now hesitant to work with the CCSD.

â€œI didnâ€™t move to Cambria to get in a fight,â€? he repeated numerous times during our interview. â€œI had a roofing business in East L.A., I had all the fights I wanted, you know what I mean?â€?

Covellâ€™s ranch isnâ€™t part of CCSD property and doesnâ€™t receive any services from the CCSD. He said heâ€™s tried to be a good neighbor but the town has treated him unfairly. What irked Covell the most was the CCSD declaration of an ex parte hearing to seize his land.

An ex parte hearing occurs at the request of one legal party, in this case the CCSD, in the absence of the other, Covell.

#Covell had set up a meeting with Joan Cobin, Cambria board president, but less than a day before the meeting a law firm in Santa Barbara contacted him and told him they were holding an ex parte hearing at the superior court the next day to seize his land. Without legal counsel, Covell and his wife attended the hearing and pleaded their side to the judge.

The CCSD effectively caught Covell with his pants down, he said.

â€œThis whole thing would have been handled correctly and been over with now, probably with everyone ending it with a smile on their face, if they hadnâ€™t started this ex parte hearing deal,â€? said Covell.

Covell might have considered selling the land to the CCSD, but he says even then they completely insulted him with their offer.

â€œWhat they offered me for the property was less than what I would have to pay for a 20-year-old pickup truck to drive around the ranch,â€? he said. â€œThey offered me $2,000.â€?

Covellâ€™s familiar with real estate math. When he moved to his property in Cambria, there were 23 existing parcels. With two potential houses allowed on each of the large parcels, Covell and his family were looking at a making a fortune somewhere in the realm of $46 million for the property. But Covell went for the easement instead.

â€œIn one sense it was the dumbest real estate and financial decision anybody could possibly make,â€? he said. â€œBut in another sense it was the best thing we as a family could do for the property and the environment.â€?

What doesnâ€™t add up to Covell and others is why the CCSD is forcing itself onto a piece of private land that contains incredibly rare and endangered Monterey pines, when it could use the existing lot without condemning land and without cutting down trees.

The CCSD says the existing lot is too small and not adequate for maintaining and building the new tanks. But critics of the CCSD say itâ€™s unfairly pandering to the neighbors of the existing tanks.

â€œItâ€™s not a questions of people versus pine trees,â€? said Christie. â€œThe CCSD has a suitable site for a project with no environmental impact, itâ€™s just that the neighbors object.â€?

The Gracey family, which has lived directly adjacent to the Pine Knolls tanks for 22 years, led the charge against the original CCSD tank replacement. Lawyers representing the Gracey family sent a letter to the CCSD, listing their concerns with the original tank design. Among the concerns was the potential hazard created by the 1-million-gallon tank failing. The Graceys also say that their â€œquality of life would be diminished and forever changed due to the design, size, scope, and proximity of [the] project to our home.â€?

The Graceys mounted a grassroots effort and got the CCSD to redesign its initial plan, but the CCC says that doesnâ€™t hold up.

â€œWe asked them, â€˜What is the adverse environmental impact of going ahead with the plan your staff originally came up with on the existing site?â€™â€? said Douglas. â€œAnd all they could come up with was saying, â€˜Well, the neighbors are going to sue.â€™ Thatâ€™s not an adverse environmental impact. That may be inconvenient, but thatâ€™s not the kind of impact that warrants them then going into an environmentally sensitive habitat thatâ€™s subject to a conservation easement to build these tanks.

â€œWeâ€™re saying [the CCSD] should get a regular coastal permit. And if [they] had applied for one, [they] would already have it. With the original plan that [they] had.â€?

Art Montandon, CCSDâ€™s legal counsel, said that the original plan cut into the forest as well. The original plan was never fully finished, and the CCSD was always looking at having to condemn part of Covellâ€™s land, said Montandon. The existing lot is too small to be able to build and maintain new tanks while also keeping the existing tanks, or at least one, filled to fight a potential fire.

Montandonâ€™s view doesnâ€™t resonate well with the Coastal Commission or the Planning and Building Dept., though.

This situation is exceptional, said Matt Janssen, supervisor for the SLO County Planning and Building Dept. 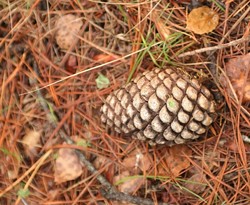 #â€œThis is fairly rare. Weâ€™ve had individuals, like private-property owners, start work without permits. This is the only public agency that I know of that weâ€™ve issued a permit to and then rescinded that permit and had them still tell us they were going to go do something.â€?

The CCSD has filed suit against the county and the CCC. On Dec. 17 a judge will hear the lawsuits, but the CCSD has said they will proceed with building the tanks regardless of the outcome. Montandon said the CCSD is not worried about setting a precedent that diminishes the integrity of conservation easements, but the CCC says itâ€™s not going to step down from this fight.

â€œTheyâ€™ve indicated that theyâ€™re going to proceed no matter what. which is really, I think, unfortunate. It would basically lead to a train wreck, because we feel so strongly about this that weâ€™ll have to pursue whatever legal remedies we can,â€? said Douglas. â€œAnd thatâ€™s a waste of public resources.â€?