Paula Motlo knew her father would have crawled to be there with her at the opening of the Smithsonian National Museum of African American History and Culture in September. 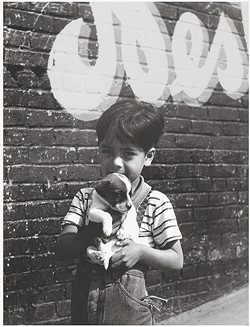 Motlo’s father, Joe Schwartz, was a legendary photographer best known for capturing images of people of color stuck in economic disparity. He died in Atascadero, where his daughter still lives, in 2013 at age 99.

His photos of African Americans from the 1930s to the 1980s will hang at the museum in Washington, D.C., permanently. As people like President Barack Obama and Oprah Winfrey spoke at the opening in September, Motlo’s heart swelled with pride.

“I felt like I was a part of history, having his work be so meaningful to the African-American story,” Motlo said.

Schwartz’s collection of photographs taken of everyday people, Latin Diaspora, focuses on the Mexican community in the 1950s—in Mexico and in a Los Angeles housing project—is currently on display at the San Luis Obispo Museum of Art (SLOMA).

Motlo said her father, who grew up poor in a housing project in Brooklyn as the son of Polish and Romanian immigrants, felt a sense of kinship with the people he photographed. 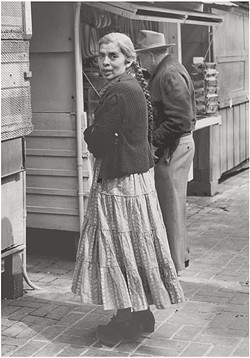 “He himself felt like a have-not,” Motlo said. “So he always had compassion for others with limited economic opportunities.”

Schwartz is remembered as a photographer with the sensibility of a participant, not a spectator. His photos, a young boy holding a puppy or a woman standing fiercely in front of her place of business, draw the viewer in with their vulnerability and underlying theme of what it means to be human; that despite our differences, our experiences are so similar.

Schwartz was also a member of The Photo League of New York, a politically progressive organization of amateur and professional photographers that existed from 1936 to 1951. The photographers all shared a commitment to portray the lives of America’s working people in their urban environment. His activism extended beyond photography, and he worked on causes like tenants’ rights and the right of African-Americans and poor whites to vote.

“This kind of person might never have been in a photo in a museum otherwise,” Ruta Saliklis, curator at SLOMA, said. “There’s just so much people can relate to.”

For about a year, Saliklis has taken Schwartz’s photos to stroke victims at Dignity Health’s Acute Rehabilitation Center. She asks, “What do you see in this photo?” The myriad details, like a painted sign on the brick wall that says “Joe’s” or the toy gun sticking out of a little boy’s pocket or the smile half hidden by the puppy’s head, cause people who haven’t spoken in some time to start excitedly babbling away.

“If you give them something that’s not related to their current condition, it engages the mind,” Saliklis said. “The photos have a lot going on.”

“What’s going on in this photo?” is a question that will be posed to all who stop by the Latin Diaspora exhibit with opportunities for response via a “talk back chalk board” where people can write down their interpretation of Schwartz’s photos.

Now, after a tumultuous and divisive presidential election that stirred up old wounds, Molto thinks it’s more important than ever for smaller communities like San Luis Obispo to embrace and appreciate diversity and gain insights into the life of less fortunate, but ordinary people.

“It seems like with what’s happening in our world today that it was just a timely message with being divided and immigration and the wall,” Motlo said. “He was focusing on these people in the ’50s, and it’s still timely.”

Ryah Cooley knows it’s not all black and white at rcooley@newtimesslo.com.