It all started with a mutt of a dog and a Frisbee.

Years ago, in the late ’90s, Chris Perondi was just another guy doing the 9-to-5 grind when he decided to get a dog from a local shelter. His name was Pepper and he was a high-energy border collie cattle dog mix. Perondi wanted to take his new furry friend jogging and teach him how to fetch a Frisbee. 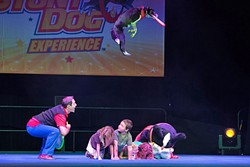 “I just kind of wanted a dog as a companion, really,” Perondi said. “I didn’t know what I was doing, to be honest, but Pepper was a natural. I found a diamond in the rough.”

Pepper’s knack for catching a Frisbee led Perondi to look online for more things pups could do with flying discs. He saw that there was a Frisbee dog competition at UC Davis. Perondi and his furry friend competed and placed second out of about 50 dogs that first year they participated.

Perondi started a Frisbee dog club in Northern California and gradually became inundated with requests for demonstrations of all the cool tricks and jumps the pups could do. A show outline began to develop. In 1999, Perondi was up to three dogs and started performing locally on the side in addition to working full time at his IT job. In 2001, he made it big: He booked a three month contract to do his show full time at a wildlife park in Long Island, New York.

“It was a little scary, but it was a once-in-a-lifetime opportunity,” Perondi said.

Today, more than 20 pups and several humans perform in his shows. Dogs leap for Frisbees, jump rope, ride skateboards, do handstands, and more. He’s performed at halftime at San Francisco 49ers games, appeared on the The Ellen DeGeneres Show, and created a dog training video series. His wife and son are also in on the act.

But what does it take to be a Perondi stunt dog, you ask? Well to start, you won’t find any pricy show dogs in this pack. Every last one of the canine performers in his company, the Stunt Dog Experience, is a rescue dog.

“People get this idea that every dog in the pound is a bad dog, and that’s absolutely not the case,” Perondi said. “There are so many great rescues.”

While Perondi’s original stunt dog, Pepper, has since passed on to doggie heaven, he still looks for dogs with that same singular, focused attention and energy.

“I’m looking for tunnel vision,” Perondi said. “I don’t want them to look off to the side instead of at the toy. We try to work with each dog’s innate abilities. They’re not the dogs that want to lay around all day. They want something to do.”

The Stunt Dog crew is made-up of a mix of breeds—including cattle dogs, a golden doodle, a pug, and a terrier mix—that eat their way through about 30 pounds of dog food every six days.

Confetti, the terrier mix, is the smallest dog in the pack. Perondi adopted her from a high-kill shelter where she was previously adopted and returned three times. She was about 9 months old at the time.

“She had a lot of energy, but she was also very feisty,” Perondi said. “She was just a brat.”

While Confetti loved humans, she didn’t do well with her fellow Stunt Dogs initially and would growl when another dog approached Perondi for pets.

“She didn’t know how to behave around other dogs,” he said. “We basically had to teach her manners. She’s turned out to be one of our biggest stars.”

Confetti now graciously shares the stage and affection from humans with her fellow canine companions as she skateboards and handstands her way through each performance.

The Stunt Dog Experience will take the Cal Poly Performing Arts Center stage on April 30 at 4 p.m. For Perondi, doing what he does isn’t just about teaching dogs cool tricks, it’s about making sure each furry friend finds a forever home.

“We encourage people to check out their local shelters,” Perondi said. “We want to inspire people to adopt.”