Most photographers don’t arrive at a photo shoot armed with poop bags, but for Jillian Parks, it’s a must-have.

A strategically hidden squeaky toy captures her clients' attention because they don’t typically go for the whole “say cheese!” gimmick. And while they don’t say much in words, the Morro Bay photographer looks for cues like the wag of a tail to tell if the photo shoot is going well.

About five years ago, Parks was substitute teaching in the San Luis Obispo area when a friend asked her to assist with photographing a wedding, and soon Parks was taking her own photos. While her friend’s bread and butter was portraits and weddings, Parks couldn’t decide what to specialize in until a friend asked her what she’d want to take photos of for free on a Saturday morning.

“Dogs,” Parks answered right away. “It was like an ‘aha’ moment. I just love animals so much, and it was a way I could give back too.” 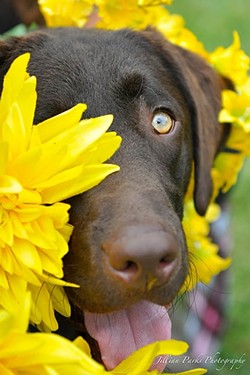 Her happiness-inducing photo series, Pets in Love, is currently on display at BlackHorse Espresso and Bakery on Foothill Boulevard in SLO. For a girl who grew up on a farm in the Central Valley with dogs and a gray fluffy cat she pushed around in a stroller, pet photography was a natural fit. Today Parks specializes in candid photos of peoples’ beloved furry family members and weddings that often feature a pet or two. Across the Central Coast, her photos can be spotted at local veterinary practices and shelters like SLO County Animal Services, where Parks often volunteers because she knows that an animal with a nice photo by its name online is more likely to get adopted. For these shoots, Parks likes to bring a box of costumes and props.

“Where they are, sometimes, is dreary and drab, and you want to be able to show that they can tolerate having flowers on their heads,” Parks said. “It’s funny, it’s just so different, and it makes them less scary and more approachable.”

For shoots with clients’ pets, where the animals are more relaxed, Parks comes armed with a box of tennis balls, (rejects donated from local courts) and starts out on the ground on her tummy so the pups can get comfortable with her, maybe lick or sniff the camera.

“I’m able to be myself a lot more,” Parks said. “I’m a pretty goofy person anyway, so crawling on the ground with dogs is kind of my happy place.”

While her clients are mostly of the canine variety, Parks also shoots cats and even a goat or two. Once, a friend’s hamster became the star of a series of photos, from sitting on a toy dragon to peeking out from the windows of a dollhouse.

When owners tell her, “You’ve captured my dog’s look,” Parks says she has that same “aha” moment all over again, even if her own pups, Rico and Bailey, sniff her suspiciously when she gets home from work.

While Parks also has her own human kids, she knows just how special that bond between man and dog can be.

“The unconditional love that the dogs give us every day is such a good reminder of how we should be,” Parks said. “To be loved so much and not want anything in return, it’s just humbling. In the end, all you have left is memories. I think it’s important to have one beautiful picture of each of the dogs that have affected your life.”

Crazy dog lady Ryah Cooley can be reached at rcooley@newtimesslo.com.