A dream and a Hail Mary

I vividly remember the first time I spoke to the Vines to Wines Club at Cal Poly in 1996, and I've been an advocate of the group ever since. I love meeting with these aspiring young winemakers who chase their dreams with unbridled enthusiasm. I'm particularly proud of one student I've watched blossom into a highly respected winemaker on the Central Coast over the past 11 years: Paul Wilkins.

I met Wilkins while attending a wine club tasting at the home of Professor Bob and Sandra Noyes, who invited me to meet the 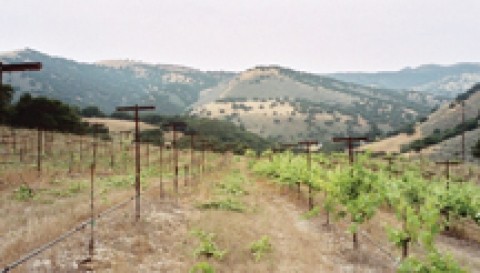 # students. Besides Wilkins, I met his future wife, Kathleen Chandler (they likely had no idea that would happen), and James Ontiveros, a Santa Maria native whose vocation was viticulture. Wilkins and I so frequently crossed paths that we became friends, which provided me the catbird seat to watch this gifted winemaker realize his dreams.

This spring, Wilkins and his two partners released their first 2005 Pinot Noir Bien Nacido Vineyard under their new label, Alta Maria. During the World of Pinot Noir Celebration in March, their impressive Pinot won high praise from critics and wine lovers who tasted it. Unquestionably, Alta Maria has all the components necessary to achieve cult status. Naturally, Wilkins emphasizes: "It's the combination of our talents that makes Alta Maria such an interesting new brand."

"We wanted to rally against outsiders (national media) thinking Santa Maria Valley had hit its stride," Wilkins said pointedly. "They're not looking at what's being done here now."

The duo brought a wealth of talent to the production side, but they knew they needed a marketing expert to place their wines on great restaurant wine lists and win the attention of major wine publications.

Ontiveros established his first brand, Native9 (native to the ninth) so named because he's a ninth generation Santa Marian in 2002. Upon reaching commercial production levels in '04, he hired Sao (Song) Anash, formerly executive director of the Santa Barbara Vintners' Association, for her marketing expertise. But rather than hire Anash to promote Alta Maria, they invited her to join their partnership.

"In this competitive marketplace, wines have to be amazing to be discovered," Ontiveros explained. "We pitched the idea to Sao because we realized how valuable she could be, and she had an interest."

Alta Maria was created to produce distinctive wines from the finest vineyards in Santa Maria Valley. Native9 Pinot Noir comes from Rancho Ontiveros Vineyard, but there's not enough to provide for Alta Maria, too. So Ontiveros buys from other vineyards around them. With eight generations behind him, Ontiveros is well connected with other family-run farms in the region. Obviously, none of these partners are new to the business, and they've all earned respect from their peers. Anash was raised in Napa Valley where she began her public relations and marketing firm Muse Management, promoting wineries throughout the state.

Wilkins was still studying at Cal Poly when he started working at Edna Valley Vineyard to learn the nuts and bolts of the business. Winemakers call such attendants "cellar rats," and they do everything from sweeping floors and scrubbing equipment to kowtowing to tasting room guests. Yet even on his first date with Kathleen, he took a busman's holiday. Wilkins took her out wine tasting, which ended at Alban Vineyards. In those days, consumers could still call to visit owner/winemaker John Alban, but no more. His wines are sold out before they're made to those who wisely joined his mailing list when he began selling wine. The majority of his wines are sold to his mailing list and exclusive restaurants very few go to wine shops and stores.

Wilkins had the good fortune to keep meeting Alban at wine tastings, which soon landed him a job and the position of assistant winemaker. He remained there eight years and successfully established himself as a winemaking consultant for small brands during his last year. When Wilkins left Alban in March 2005, he expanded his company, Vinotech, which still consults for Hug Cellars in Paso Robles, Per Bacco in San Luis Obispo, and Native9 in Santa Maria. While he loves his "day job" which pays his bills he's ecstatic about releasing Alta Maria, the first brand he can call his own.

Ontiveros' real job (small brands rarely make a living off wine sales alone) is director of sales and marketing for the famed Bien Nacido Vineyard. His expertise in viticulture brings another element to Alta Maria. They don't plan on simply buying grapes from others they're developing new vineyards with the potential to produce extraordinary wines. One such project is with Tyke Minetti, son of Clarence Minetti, who founded the Far Western Tavern in Guadalupe. Minetti bought a ranch with a four-acre Syrah vineyard that had been abandoned. Ontiveros recognized the possibility for growing distinctive Syrah on the site, just north of the original Byron Vineyards (now Kenneth Volk Vineyards) on Tepusquet Road. Ontiveros revived the declining vineyard by grafting new Syrah clones and adding vines, and expects his first harvest there in fall 2008.

According to Wilkins, "It's near heaven on earth back there." He noted that it's near Uriel J. Nielson Vineyard, Santa Barbara County's first commercial vineyard planted in 1964, from which they buy Grenache. But the trio admits that they aren't as rigid about a vineyard's appellation as they are about its quality.

"We're going to focus on Santa Maria, but if something special comes up, you don't want to count anything out," Ontiveros said.

They've also just released a SLO County Syrah. The back label proudly announces, "Salvation this wine is ours."

The name Alta Maria was chosen in respect to Ontiveros' ancestor, Don Juan Pacifico Ontiveros, who established Rancho Tepusquet, founded around 1850, which begins where the junction of Sisquoc and Cuyama rivers form the Santa Maria River.

"It was called 'the creek' until a torrential flood turned it into a river," Wilkins explained. "Ontiveros named it for Saint Mary."

To honor its history, the trio decided that their label should be named for her, too.

"Then we had to decide which Mary to honor, Mary the Redeemer or Mary the Mediator, and chose the latter for her ability to amplify the good, such as identifying the best vineyards in Santa Maria Valley," Wilkins said.

I love highlighting small artisanal producers like Alta Maria. New brands without the presence of a tasting room seem to appear every day on the Central Coast, but few are as committed to quality as the people behind this new one. Soon, you'll only find their wines in exclusive restaurants, like Alban, and pay much higher prices to enjoy a bottle. Those savvy enough to join their mailing list early, however, will always have first choice at buying these extraordinary wines.

You can contact New Time's Cuisine columnist at Kathy@GrapevineRadio.net.