It was a busy year for Grover Beach police officers.

In 2017, the department fielded 21,159 calls for service and more than 4,800 911 calls. The bulk of those calls were handled by 14 of the department's 18 sworn officers, who are assigned patrol duties. But while the population of the city grew by more than 1,500 people in the last 10 years, those staffing numbers have remained virtually unchanged. 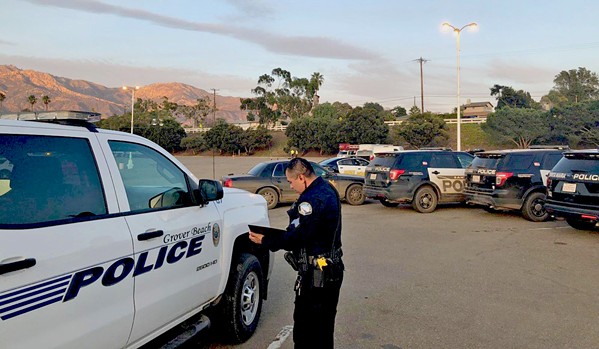 "You have a very lean staff, and I know I'm not telling you anything you don't already know," Ralph Martin, former chief for the Santa Maria Police Department, told members of the Grover Beach City Council at a July 9 meeting. "I think you need to take a hard look at that."

Martin and his business partner, former Santa Maria City Manager Rick Haydon, were hired as consultants to conduct a departmentwide audit of the Grover Beach Police Department's operations. That audit found that while the department's employees were "hard working and resourceful" it also noted that its limited staffing was a major area of concern.

Much of that concern was centered on the impact of the department's ability to patrol the city. Martin and Haydon's report found that, on average, there are only two single-occupancy patrol cars on duty at any one time. If one of those patrol cars is out of service or not available due to working another call or transporting an arrestee to the SLO County Jail, it leaves a single officer to patrol the entire city.

"It presents not only a coverage issue, but a backup issue," Martin said.

The report also noted that Grover Beach police officers had the second highest workload of any municipal police department in SLO County last year, fielding an estimated 1,114 calls per-officer for all of 2017, according to the report. Because of current vacancies, the report also noted that the department's policy is to use overtime to fill those empty positions. Between the vacancies and the already high workload, the report warned that the prolonged use of that practice might cause officer burnout, particularly because the officers work 12-hour shifts.

To bolster the department's numbers and reduce the risk of burnout, Martin and Haydon recommended that the department create three new police officer positions and one more sergeant.

"That staffing number would be consistent with the two agencies around us," Grover Beach Police Chief John Peters told New Times.

But hiring police officers in SLO County can be challenging. Peters said that the pool of applicants for officer positions has shrunk over the last 10 years, while the cost to live on the Central Coast has continued to climb.

"The cost of living is much higher in our area than others and that can make recruitment difficult," he said. "When a potential employee has to move from outside the area, those costs can add up."

Still, Peters said that the Grover Beach City Council had already voted to give the department's officers a 12 percent raise over the next three years, as well as increasing the department's hiring incentive package, both of which could help entice applicants. Peters said the department is looking to fill the three current vacancies; it's taking applications to send a recruit through police academy training, as well as putting out calls for a "lateral" police officer—an officer who is already working for another department or has already graduated from the academy. According to a job posting on the city's website, starting pay for the lateral officer position ranges from $61,380 to $78,348 annually with a hiring bonus of up to $11,000.

Hiring the four officers recommended by the audit won't begin immediately. Peters said the audit was the first step of a long-range planning process. Moving forward, he said the department and city would use the report to develop a five-year strategic plan. The council would also consider the report's findings during future budgeting processes, where it can decide if it wants to allocate funding for additional officers, he said.

"This isn't something we are saying needs to happen next week," Martin told the council at July 9 meeting. "We are talking about a three-to-five-year plan." Δ