PCPA's production of The Weir isn't quite a home run

We’ve all been storytellers at one point or another, whether entertaining friends or co-workers with a verbal account of a particular event in our lives or spinning fictional fantasies through a computer. It’s a very human activity, and the central concept in Conor McPherson’s production The Weir, playing at PCPA through Oct. 5.

A weir, by the by, is a dam, a point in the water where several different streams are temporarily united—an obvious metaphor 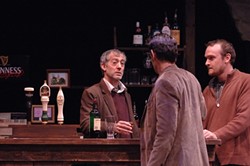 for the congregation of five individuals in a pub outside Carrick on a blustery Irish night. The intimacy of the pub, and the stories that will be told there, is heightened by the fact that The Weir is staged at the Severson Theatre—a significantly smaller space than the more frequently used Marian Theatre.

In one respect, the ways in which the play succeeds are due to a confluence of talent not unlike that suggested by the play’s title. Scenic designer Abby Hogan and costume designer Misti Bradford effectively establish that the five characters occupy a specific space: an Irish pub encased in isolation and a harsh climate. And one of the truly rewarding aspects of any PCPA performance is that the quality of acting is always guaranteed. In a performance filled with delightful Irish accents, you don’t have to bend your ear for mistakes—a quality assurance you can’t always take for granted when it comes to local productions.

Jack (Peter Hadres) is the first to enter the pub, removing his overcoat and cap and busying himself behind the bar. He is followed onstage by Brendan (Jerry Lee)—the bartender—Jim (Evans Jarnefeldt), Finbar (Andrew Philpot) and Valerie (Elizabeth Stuart), the simulated squeak of a door opening heralding each new arrival. For the most part the dialogue and what little action there is consists of small-town gossip, old friends shooting the breeze and teasing one another. Of course, the presence of a single woman from Dublin amongst a group of primarily small-town bachelors is bound to de-rail the normal course an evening in the pub might take.

Old photographs hanging on the pub wall act as a catalyst and Jack is soon telling a story about a fairy road. Each, with the exception of Brendan, takes a turn stepping forward, towards the audience and into the light, to tell his or her own story. Most are tales of fairies and ghosts, the topics American audiences might associate with Irish culture; of course, if any other group of grown men began discussing fairies it would probably be ridiculous, but because of their heritage, you find yourself listening without question. One particular tale—about a pervert in a graveyard—is downright unexpected.

As the characters interact, the expressions they cast one another—taunting, provoking, disbelieving, encouraging—are subtle, but brilliant. Ultimately, it is these minor details that make The Weir what it is: a tale of kindness and companionship utterly grounded in reality, despite the fantastical elements to the stories. Finbar and Jack’s antagonistic sparring is precisely what one might expect from old friends, and particularly when a move to a bigger city breeds resentment and envy between them. Philpot does a very good job being the easily embarrassed braggart Finbar who owns half the town and doesn’t quite look like the rest, a little more polished and oily, like a salesman and not at all rustic. And Jack (Hadres) is all bark, feeble, as the oldest member of the unofficial conclave, and somehow goat-like. Jim, played by Jarnefeldt, shares Jack’s feebleness, though this is more due to his socially awkward nature than age.

Despite the fact of everyone succeeding in their respective tasks—creating a realistic environment, constructing a character that feels genuine—The Weir lacks the necessary emotional charge to make it truly memorable, or entertaining. It’s difficult to lay blame at the feet of a writer as acclaimed as McPherson, but there are few descriptives that match this play as accurately as the term fine. Sure, the audience elicits occasional staccato laughter, and the characters are genuinely likeable, but it is one of Jack’s final lines that captures the true spirit of the production. “This has been a strange little evening for me,” he says. “Fuck, we could do worse.” And The Weir is a fine little play and yes, PCPA could have done a lot worse. But they could have done much better—probably with a different, spicier, play altogether.

Arts Editor Ashley Schwellenbach could never say no to an Irish accent. Send tales of Eire to aschwellenbach@newtimesslo.com.