The Producers shows at the SLO
Repertory Theatre through March 11. Tickets
range from $30 to $50. Visit slorep.org for more
information.

We've all had it. That eureka, light-bulb moment where the perfect life-changing idea is suddenly oh so clear to us.

But in all likelihood, total and complete failure wasn't a part of that plan. Hit Broadway musical The Producers takes the standard ideas we have about success and how to get there and turns them on their head.

Currently onstage at the San Luis Obispo Repertory Theatre, the show is also just a good time, filled with laughs and charming musical numbers from start to finish. 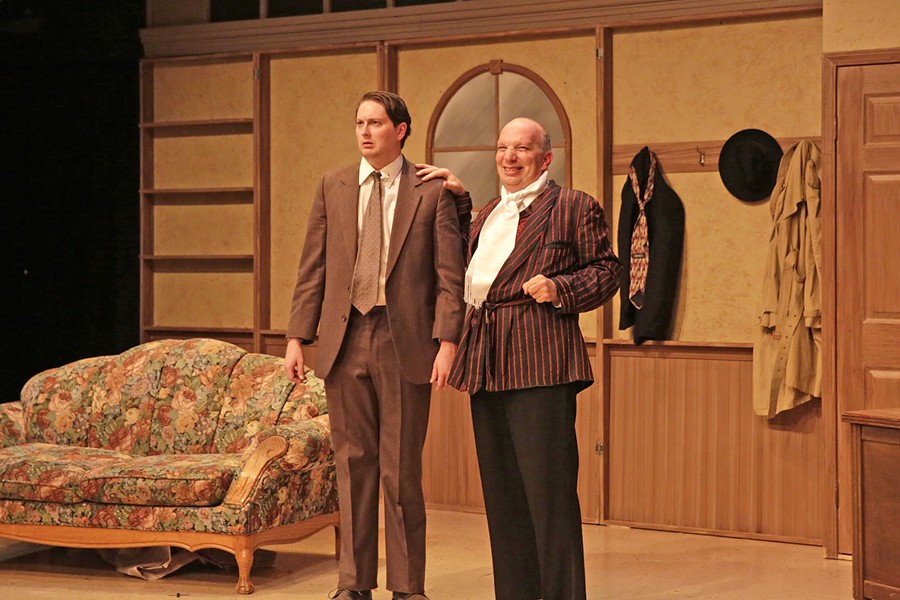 After attempting to make a musical version of Hamlet a big hit, Max Bialystock (Billy Breed) bemoans his fate as the former "King of Old Broadway," when his show opens and closes on the same night. Later, when the ever anxious accountant Leo Bloom (Toby Tropper) comes by to audit Bialystock's books, a seemingly terribly idea is born when Leo realizes a producer could potentially make more money off a play that fails than one that has a successful run. The two team up to find and produce the worst play ever, and mayhem and laughs ensue.

The 2001 musical was adapted by Mel Brooks and Thomas Meehan from Brooks' 1967 film of the same name. Kevin Harris, managing artistic director for SLO Rep, helms the production alongside Lacy McNamara (owner of Lyrics and Melodies Studios in Los Osos), who's overseeing musical direction, and Andrew Silvaggio (artistic director of the Civic Ballet of San Luis Obispo) stepping in as choreographer.

Breed makes his SLO Rep debut with this show and has also acted in performances with the Great American Melodrama, the Pacific Conservatory Theatre (PCPA), and the Oregon Cabaret Theatre. Alongside the sweet, yet so nervous he might fall over bundle of nerves that is Tropper's Leo, Breed shines as the right amount of despicable and admirable. Sure, he's down and out, trading sex favors with old ladies for money for his shows, but he's going to make things happen. A touch of charming naiveté from Tropper (a PCPA graduate who, according to his bio, "once met Mel Brooks and they had a very nice chat about tomato sandwiches") allows the duo to bounce perfectly off each other.

Morality aside, the show is an homage to Broadway, playfully poking fun at the world of theater and also creating caricatures of Nazis and gay culture within the theater scene along the way. Mike Mesker (recently seen as the Old Man in A Christmas Story at SLO Rep) and Cameron Parker (PCPA grad and seen in SLO Rep's Our Town) deliver standout performances as the worst director ever and his fabulous "common law assistant." Meanwhile, Seth Blackburn marches in as the frightening and hilarious Hitler-loving playwright who pens Springtime for Hitler: A Gay Romp with Adolf and Eva at Berchtesgaden.

When things don't go exactly according to plan, Bialystock bemoans to Leo, "We got the wrong play, the wrong director, the wrong cast. Where did we go right?"

In spite of their best efforts, Bialystock and Leo just manage to find some success, in show biz and friendship. Δ

Arts Editor Ryah Cooley is humming along at rcooley@newtimesslo.com.