'A Ghost Story' is challenging and thought provoking

Writer-director David Lowery (Ain't Them Bodies Saints, Pete's Dragon) delivers this story about a white sheet-clad ghost (Casey Affleck) who returns to his home in an attempt to reconnect with his grieving wife (Rooney Mara). (92 min.)

Glen If you like to be challenged by a film, to be taken to unusual places, to have your expectations upended, you just may enjoy A Ghost Story, which is an odd, often slow, but ultimately thought provoking cinematic experience. Made on the cheap by Lowery with the same two actors he used in the highly regarded Ain't Them Bodies Saints, the film is a meditation on life and death, love and loss, legacy and the vastness of time and space. Married couple C (Affleck) and M (Mara) are young, in love, but seem to want different things. She wants to leave the worn out rental house they share, while he feels tied to the place. After he dies in a car accident, he returns to the house—a silent, sheet-covered ghost. Lowery sets up the story slowly. His camera will linger on an empty bed for an uncomfortably long time. There's a scene of a grieving M eating a pie that feels like it's five minutes long. These seem like bizarre choices but they basically put the viewer in the same position as C—a passive spectator with no ability to interact and no way to affect the proceedings. The film begins to pick up steam after M moves and drives away, leaving C in an empty house until a Spanish speaking single mother and her two young children move in, disrupting C's vigil and leading to some of the only discernable "haunting" behavior. C remains in the house as tenants come and go until we've traveled into the future where a massive office building is being constructed on the site and then back to the past when C witnesses a pioneer family taking up residence. C has transcended time, experiencing the past, present, and future. Yes, it's a weird film.

Anna To call A Ghost Story a slow burning film is certainly true, but it's more a melancholy study of the vastness of life, time, and ultimately grief. C and M are both drawn to each other and frustrated by each other. As the story unfolds, we get glances into how different they may be from the characters first presented. When the film begins, the two are magnetic, but as their past and present lives are revealed throughout the film, so are the nuances of their characters. C is guarded and easily shuts down into an incommunicative state. M is frustrated by him, saying, "Couples are supposed to make decisions together, so why am I the one always deciding?" Largely devoid of dialogue and full of lingering, quiet shots, I have no doubt A Ghost Story will prove a frustrating 92 minutes for some. However, while those elements do make the film's length feel more stretched, it's indicative of this film's desire to draw us into the vast scope it hopes to entail. The trailer presented it as an aching love story, which is an anchor for the film, but the film moves beyond into a sort of imprisonment of C's ghost, who continues to scratch at the walls of his old house in hopes of finding M's hidden away secrets.

Glen It's certainly an ambitious film, and you're right that C is imprisoned, but why and how and what does it all mean? At one point we see him "talk" via subtitles with another ghost he sees through the window of a house next door. That ghost is also "waiting," but has been waiting for so long it can no longer recall whom it's waiting for. I'm not sure what to make of it or what Lowery's point is. There's another scene when a man (Will Oldham) is holding forth at a crowded house party in C and M's old house, talking about how everyone is trying to leave a legacy and be remembered. I honestly don't know how to interpret all of this or why Lowery decided to depict his ghosts as faceless, voiceless entities covered with white sheets with empty eyeholes. To be frank, I'm still processing the film. It reminded me a little of Terrence Malick's The Tree of Life, which I found challenging but a lot more accessible. It's interesting but I can't say I enjoyed watching A Ghost Story. I was fascinated but not especially entertained. When it was over, I didn't feel fulfilled. I guess what I'm saying is it's not a film I would necessarily recommend except to filmgoers who are looking to have their expectations stretched and challenged. If that's you, go check it out, and when you've seen it, feel free to drop me an email and explain it to me. 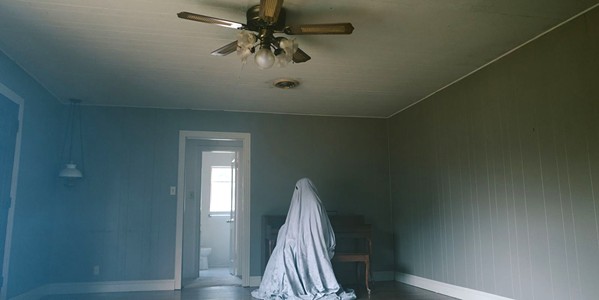 Anna The more time I spend away from the film, the more I feel like I enjoyed it. That sounds like an insult, but it isn't meant to be. Like you, the film is still settling with me, even days later. While those long, static shots and moments of silent tension were challenging to watch, I can't help but keep thinking about it, something I personally really like to happen after a film. I do think that having a mostly faceless, voiceless main character throws a mountain of difficulty at Lowery—conveying humanity's nuances without that nuance of an expressive character is somewhat out of reach. While a lot of his time is spent under the sheet, when he emerges, Affleck's performance as C taps into the deep, dark bits of his character development, and Mara is haunted and lovely. Lowery made good use of Dark Room's song "I Get Overwhelmed," which got in my head so deep after the film, I downloaded it. This film isn't going to be loved by all, and it will be a challenge for those who don't give up on it. Is it worth the challenge? To me, yes, but I like the process of pulling apart the sort of ambiguous and uneasy feelings that films like A Ghost Story leave me with. If you can manage sitting with the silence and simplicity for 92 minutes, it's worth a matinee. I doubt it will translate as effectively for home viewing, so if it interests you, see it on the big screen. Δ