It’s Friday, Dec. 7, the date that will live on in infamy and also the evening of the SLO Holiday Parade. My wife Anna and I just parked our eGo electric scooters in the bike rack in front of McCarthy’s Irish Pub and are hightailing it to Mission Plaza, where we were supposed to meet friends about 25 minutes ago!

By the time we get there, they’re gone. Dang it! The parade doesn’t start for about 35 minutes, so we decide to walk by the various floats and folks waiting to strut their stuff. There’re a lot of little hooligans with inline skates and hockey sticks tearing up the streets, a gaggle of little girls spinning lighted batons, a marching band warming up. Looks like it’s going to be fun!

Anna and I decide to wander to Santa’s House, where she laments never having been able to sit on Santa’s lap and tell him what she wants for Christmas.

She doesn’t, so we head over to the carousel, which has come to a stop to load more smiling kids onboard the plastic horses. A “holiday tree” towers over the plaza, lit up with colored lights. Aside from being a balmy 65 degrees with nary a snowflake in sight, downtown feels like a winter wonderland.

We start walking the parade route, and people are lined up all the way, some sitting in chairs, others standing, a few in prime spots in some of the open-air restaurants. When we get to the corner of Higuera and Broad, we see former mayoral candidate Don Hedrick on his electric cart, and he’s only too happy to stop for a quick pic before heading onward to spread some holiday cheer. 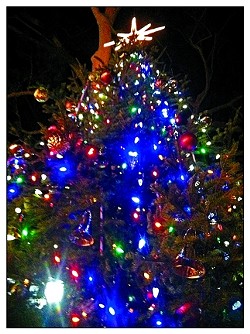 It’s still a little before 7 p.m., and it will probably take a good half an hour before the parade winds its way down to the end on Nipomo, so we decide to head over to McCarthy’s and grab a couple PBRs and Jameson shots.

There’s plenty of good cheer in here, too, and Mama’s Meatball has fired up its mobile pizza oven in the parking lot. Anna and I start looking over the menu, getting hungrier and hungrier.

“When are you going to start serving pizzas?” I ask the guy manning the oven, which is filled with brightly burning firewood. 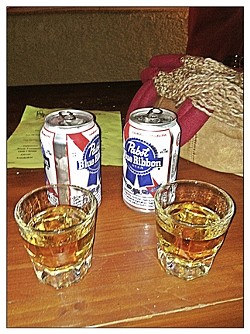 “It’ll take about an hour for the coals to be ready,” he tells me, so Anna and I order another round.

Now we’re famished, and the oven’s still not ready, so we decide to scoot home and make some dinner to soak up these delicious beverages. We assuage ourselves by noting that though we didn’t see the parade go by, we at least walked by the parade. Close enough!