The Grizzly Youth Academy is a lot like other high schools. Students between the ages of 16 and 18 both male and female attend class five days a week from 8 a.m. to 3:30 p.m. They join student council, take driver's education, and participate in intramural sports. They have goals and dreams and battle the uncertainties of bringing those dreams to fruition. 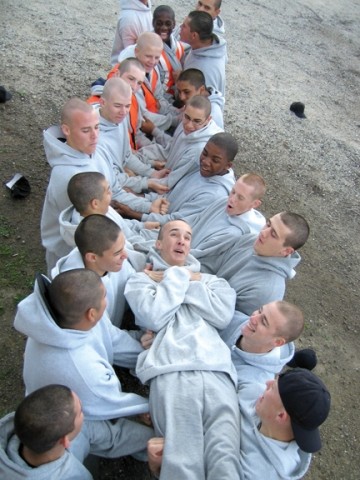 # Unlike most other students, however, they also wear military uniforms and march to and from class. Another distinction is that every one of them chose to enroll in the academy.

"For most of our kids, this is a last chance," said Program Director LTC Nancy Baird. "They're fresh out of options."

The Grizzly Youth Academy is a high school chartered through the San Luis Obispo County Office of Education and run by the California National Guard. All of the students referred to as cadets have either dropped out of high school or are in danger of dropping out. Cadets come from all over the state and represent different backgrounds. All of the 180 students currently enrolled in the academy come from California, and many simply need to escape and learn to cope with difficult situations at home and school.

"Sometimes people just need a fresh start," Baird said. "You make a bunch of bad decisions again and again and again, and you start to feel helpless. I think that there's comfort in structure and comfort in consistency. We have children dealing with very adult problems."

When cadets lead structured lives, they don't have to worry about what to eat, how to spend free time, or whether to attend class. Additionally, through structure and consistency, the National Guard can create a safe environment for the cadets. They can learn, change, and develop decision-making abilities in a fear-free environment.

To provide that consistency, the academy requires cadets to lead highly regimented lives throughout the five-month program. They wake up at 5:30 a.m. to shower, eat breakfast, and participate in light stretching before school begins. They march to class in formation. School begins at 8 a.m. and runs until 3:30 p.m. After school, students participate in counseling groups or physical education, eat dinner around 5:30, and participate in study hall. Following that, they have a limited period of time to write letters, read, or talk before "lights out" at 9 p.m. 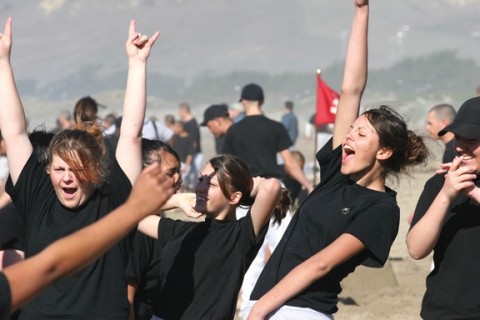 # On the weekends, the cadets get to sleep in until around 6 a.m. They spend most Saturdays doing community projects to fulfill a minimum requirement of 40 hours of service. On Sundays, they have time to read, do laundry, play basketball, and write letters. The rigid schedule affords little opportunity for them to grow bored, and the environment offers few distractions.

"Our students come here with a knowledge of what they're getting into, what it is that they're enrolled in," said Grizzly Youth Academy Principal Paul Piette. "Our goals are to change attitudes, behaviors, and beliefs that get in the way of their success. We want to help them discover their strengths and their passions."

In an effort to introduce cadets to potential careers, the school hosts trade-union speakers, a career fair, and an internship program that's far more extensive than the job shadowing experience offered by most public high schools. Local businesses offer internship opportunities to the academy, and interested cadets apply to participate in internships, which, generally, 50 to 60 students receive. As interns, cadets spend several hours a day four days a week for four weeks learning more about their new industry of choice. Each new experience and opportunity helps them create and refine goals that they establish at the beginning of their participation in the California Grizzly Challenge.

Some students are so geographically secluded in their home neighborhoods that they've never seen the ocean, despite growing up in California. Through the academy, these students get a chance to see what they never have before. They also get an invigorating dose of art through trips to PCPA, the Steinbeck Museum, the Santa Barbara Fine Arts Museum, and Hearst Castle.

"What we know is that these kids did not succeed in a traditional educational setting, so it's up to us to provide a structure and a series of experiences they will succeed in," Piette explained.

Creating a unique structure for the cadets means providing unique authority figures. At school, students receive instruction from civilian teachers with supplemental aid from the National Guard. All told, the National Guard has about 50 staff members who work with the cadets. National Guard men and women, or cadres, receive National Guard Youth ChalleNGe Program training to equip them to interact with at-risk teenagers. In addition, the Grizzly Youth Academy employs four full-time counselors, making a better student-counselor ratio than most high schools offer.

Despite the military structure, the uniforms, and the formations, the program is not a boot camp. There is no zero-tolerance policy, and the cadets are not expected to behave perfectly. In fact, academy staff go out of their way to identify creative solutions for behavioral problems. When one student couldn't stop talking during formation, he was assigned the job of checking the barracks before leaving. Thus,

he no longer had the time or opportunity to disrupt formation.

"We're willing to deal with difficult moments if we think they're learning from it," Baird said. "As long as the environment is safe, I'll go to the mat with these kids."

While boot camps train participants to become soldiers, the Grizzly Youth Academy is not such a training ground. Rather than trying to deprive students of critical thinking skills a standard element of instruction for boot camps and soldier training the purpose of the academy is to turn the cadets into critical thinkers, to teach them to connect potential consequences with their actions.

When the cadets graduate from the academy after five months, the program monitors their progress. Each cadet meets regularly with a mentor, an unrelated adult who helps the alumnus focus on goals and provides monthly reports to the academy.

"Twenty-two weeks in residence is long enough to actually make a change," Baird said. "They really do have time to try on a new you, so to speak, and become that person before they return to the real world."


Top of the heap
At the beginning of this year, the Grizzly Youth Academy received an award for having the best overall National Guard Youth ChalleNGe Program in the country. The Grizzly Youth Academy received the award because it's considered to be the program that most successfully imparts eight core components: leadership and followership, community service, job skills, educational excellence, responsible citizenship, life coping skills, health and hygiene, and physical fitness.

Sign up
For more information about opportunities and events at the Grizzly Youth Academy, visit www.grizzlyyouthacademy.org.