A hardened cynic tries out a yoga workshop about menstrual cycles

I can hardly walk. My arms and legs feel like they have anchors weighing them down. This was all a mistake. I don’t know what happened.

Let me preface this by telling you male readers that the following words will be used frequently and with intense flourish: periods, menstrual cycle, heavy flow, cramps, and various permutations of PMS. Believe me, these are the least troubling terms.

Let me explain myself: I went to period yoga.

Sorry, that left a rancid taste in my mouth. Let’s try this one more time.

I went to period yoga. You still with me? Good, let’s dive in.

I should probably mention that I don’t like yoga. The one time I went years ago left me haggard, embarrassed, and probably emotionally damaged. I should also mention that I have very limited tolerance for the healing-crystal-slinging, namaste-naggers of the world, and I have even less patience for women who seem to think feminine strength arises out of conversations about our lady bits, like we’re in some kind of interminable Yaz commercial.

So, here’s how it all began. I had signed up for the class. The people in charge of the studio were nice enough to let me in for free because the class originally cost $45. I need my $45 to buy a Costco-size flat worth of sanitary napkins to stuff in the mouth of anyone talking about their periods, or to buy a nice steak. 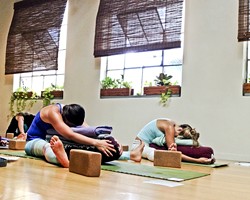 The day before, I received an email from one of the class instructors, poet and Cal Poly writing instructor Leslie St. John. It seemed sane. Normal words were there, like “strawberries” and “hello.” But these were mere distractions, ploys from the period elite to brainwash me into thinking they were just normal gals who ate fruit like I did, without consulting Buddha or discussing the strawberry’s carbon footprint. I should have known better.

I walk into the studio on a Saturday afternoon. So far, nothing amiss. Everyone is wearing clothes and the bathrooms smell like lavender. Good start. I go to the desk, I say “hello” (again, a normal word), and a devious thought trickles into my mind.

“Hello,” I say again, this time with an ever-so-subtle lilt. I walk in the class and I see Leslie St. John and her co-presenter, Alycia (Maia) Kiley. This is where things start getting weird.

We go around the room and ask what everybody’s name is. There are about nine people in the room altogether. No guys though, which is a disappointment, ’cause the only reason you go to a period yoga workshop is to pick up sweet, sweet males. We get to me. I panic.

“Hello, I’m Jessica. I have one ovary. And, I’m from Australia.” Yeah, that happened. I’m not from Australia, and I have two fully functioning egg sacs. My name is Jessica, though. I’m still not sure why I was Australian, but this was far from the weirdest thing to be said that Saturday.

“Alright, let’s go around the round and talk about what drew you to this class,” Kiley said. The words that followed were so much worse than anything even a fake Australian with one ovary could imagine.

“I like to chart my moon time,” Kiley said.

“I’m a Leo, so I want to learn about how to better connect with my moon flow,” someone ACTUALLY said.

“My husband calls it pre-monstral syndrome,” a lady laughed, while I squirmed.

Chart my moon time? What is this? A cartography class for the crotch? The journaling prompts weren’t any better.

“If you could create your own moon lodge what would it look like? What would be inside to nourish you during those days?”

Absolutely no talk of the moon, or cycles, or flow—that’s what I would like in my moon lodge, thank you very much.

As you can probably tell, I was feeling pretty good about myself. “Boy, were these ladies crazy,” I muttered in that faux-Australian accent. And then, we did the yoga. Hours and hours of muscle-draining, limb-twitching, falling-on-my-ass-because-I-can’t-hold-a-balance yoga.

It was time to end. I had made it through period yoga, barely. These women were so nice, they gave me free strawberries, they could do handstands—how could I hate them? After all, despite the moon babble, it wasn’t all that bad. And I was the one who faked an Australian accent. Maybe I’m the crazy one. Period.

Jessica Peña is stuck in her moon lodge at the moment, but you can leave her a message at jpena@newtimesslo.com.