A heavy dose of the tonic of laughter

Anyone incapable of appreciating the absurd would do well to stay clear of PCPA’s adaptation of MoliÀre’s The Imaginary Invalid, running through Aug. 23 in Santa Maria and Sept. 7 in Solvang. From the basic plot premise—a family’s antics to prevent the hypochondriac patriarch from forcibly marrying his daughter to the son of a doctor—to the characters themselves, the tale is very, very funny, particularly if you have no strong affiliation with members of the medical profession. 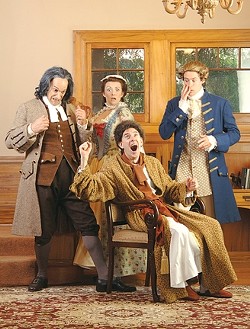 This adaptation, translated by PCPA’s Literary Manager Patricia Troxel, is set, not in 17th-century France, but in colonial Philadelphia. The title character, Argan, becomes Silas Argan (played by William Youmans), his marriageable daughter is no longer Angelique but Abigail (Vanessa Ballam), and his wife is not Beline but Lydia (Gwendolen Morton). Apart from these few minor Americanizations, the transition from one continent and century to another is relatively seamless. The dialogues—often very elaborately constructed and centered upon medicine and philosophy—are well placed in a colony with a dawning respect for reason and moderation. This is, if you recall your elementary American history lessons, the society that gave birth to Ben Franklin, in whose image Argan’s brother Benjamin (David Meyers) is fashioned.

The set, from which the audience’s first impression is born, consists of a large wooden structure of elegant shelves, looming in the rear of the room. Books and vials, even the odd skull, line those shelves. Everything looks aged and stately—the sort of domicile where nothing odd should ever happen, and the sort of place that somehow always harbors more than its fair share of freakish behavior.

Each character’s entrance dictates his or her own particular brand of absurdity. Argan is no exception, his presence on stage often heralded by the loud release of various bodily functions. But when he is not honking his nose melodiously and humorously his actions and covert looks betray his ill-kept secret; he is not a convalescent but a hypochondriac.

This may, in fact, be the secret of MoliÀre’s genius: While his characters attempt to keep all manner of secrets from each other they never quite manage to prevent the audience from knowing precisely what they intend to squirrel away from everyone else. When Lydia swoops and weaves into the room, out of alleged concern for her husband’s health, the audience laughs delightedly, not because it is amusing for a wife to pass her time at her husband’s sickbed, but because her affection for him is so blatantly false. Abigail’s abhorrence for her father’s choice of suitor is manifest, despite her initial attempts to hide it from her father. Thus, the play does not rely on the device of shocking its viewer, or even leaving him or her in any uncertainty over the play’s conclusion. You will know what is coming, and from what direction, and if you are amused it will be because you are a voyeur, a connoisseur of human foibles and excess.

Perhaps the gem of the production—for what else does one call the lead in a parade of buffoonery, but a gem—is the character of Thomas Dickinson played with absolutely no restraint by Colum Parke Morgan. He enters the room with a stupefied expression and terrible bow, launches into a speech that astonishes everyone in the room, with the possible exception of Argan, who is so beyond reason that he cannot recognize its presence, or lack thereof, in another, and is an instant audience favorite. Under his mother’s controlling influence he is part manic, part show dog. But he is not to win the day, or Abigail’s heart—a fact that should surprise nobody.

Despite its excess of humor, The Imaginary Invalid will not please everyone. At moments it is contrived beyond endurance, and MoliÀre’s characters frequently pretend to be dead or assume another identity altogether to further the plot. It is difficult, in fact, to say whether you would be better suited walking into the theater armed to your ears with reason or leaving it behind at the door.

But despite being a little put off by certain wilder plot elements, the characters never cease to amuse. What might have become overbearing—like Thomas’ inability to conform his behavior to social expectation—is somehow brilliant; the stage felt incomplete in his absence.

Perhaps the best advice that can be offered with satire is this: Tumble down the rabbit hole. Embrace the self-pitying hypochondriac, the suitor whose advances will never be met with favor, the maid who taunts and prods her master. And as for the others, tenderhearted Abigail and reasonable Benjamin, I have this to say: They are necessary to progress the plot. But reason and self-righteous virtue will never be met with the same degree of glee as a doctor brandishing a miniature rocket in anticipation of his patient’s colonic irrigation.

And if The Imaginary Invalid does provoke those blameless healers, in whose capable hands we place our lives, well, who can blame them? As Prudence (Catalina Maynard) comfortingly assures a doctor-in training, “Your job is only to write prescriptions and collect fees.” If contemporary audiences happen to laugh somewhat bitterly at this particular line, well, spare your cures. MoliÀre’s already dead.

Arts Editor Ashley Schwellenbach is not yet dead, but avoids doctors like the plague. Send sugar pills to aschwellenbach@newtimesslo.com.