A herculean effort: A puppy's journey from legs casts to Madonna Mountain

If you have a vendetta against pit bulls, I don’t want to hear it. If you’re going to try and tell me some B.S. about how pit bulls have a predisposition to be more violent than other dogs and that’s why scumbags like Michael Vick force them to fight, then we definitely can’t be friends.

Instead, I invite you to put down that glass of hater-ade and listen to the story of Hercules. No, not Hercules, son of the Greek god Zeus, but Hercules the pit bull puppy.

Not long ago, young Hercules the red-nosed pit bull was down on his luck. At less than 8 weeks old, he was abandoned on the side of the freeway somewhere in North County. He was so hungry and malnourished that his little front legs grew bent, but he still tried to walk on them anyway. Finally he was found by workers from San Luis Obispo County Animal Services. Initially there was speculation that his bent legs might be caused by an internal issue and that he would have to be put down. But his brave foster mama stepped in, took him to a vet, and got some casts on those legs.

Around this time, in January, I was perusing through New Times’ Facebook feed, when up pops a picture of little Hercules, his legs in casts, and his blue eyes shining with love and hope. I had to have him. I emailed his foster mama on the spot; he had a doggy play date with the rest of our pack and then we took him home.

At 4 months old, Hercules is weighing in at more than 20 pounds, and his legs are now out of casts and growing straight and strong. It seemed like he might be ready for his first big hike, so we set our sights on tackling Madonna Mountain (Cerro San Luis) this past Saturday, March 19. 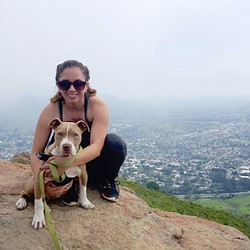 In addition to it being Hercules’ first big hike, it was also the first ever meeting of the SLO based meetup.com group, Pit Bull Lovers, started by yours truly when I realized that there was no such group in existence for people on the Central Coast who love their bully breeds. So far 11 pit bull lovers are in the group. While a few people RSVP’d to the hike, someone had to drop out while their pitty recovered from getting fixed (sorry, dude) and another was a no-show, which happens. Still we were far from alone. Joining us was Lola, Herc’s brindle 2-year-old pit bull sister, my roommate and a gaggle of her family members along with another friend and some of her relatives.

Armed with doggie-poop bags, water, treats, and a backpack big enough to hold Hercules in case he refused to go on, we started our expedition up Madonna, with Hercules promptly pooping at the trailhead because leaving one’s mark is important.

On past walks, Hercules has simply laid down on his tummy and refused to take another step when he gets tired, so I thought that might happen on Saturday, but the little puppy rose to the challenge, at times literally trying to run up the mountain—especially if big sister Lola was leading the pack. Someone has an alpha complex. He would graciously stop now and then to allow the humans to catch their breath and give him treats.

While Hercules is not the extrovert that Lola is (she will literally make out with a stranger if given the opportunity), he’s still a friendly pup, just cautious, particularly around men. So the hike up Madonna, with its bounty of human companions, also doubled as some great socialization time for lil’ Herc.

Finally we reached the top, climbing all the way to the rocks, where you can stand and get that breathtaking view of the entirety of San Luis Obispo. So we sat, a girl and her dog, overlooking our home, and I got a little teary eyed thinking about how much this ball of shorthaired fluff has gone through. Puppy, you’ve come a long way.